I thought this would be the natural follow up to Worst Dad and Worst Mom lists I have done in the past. And I found myself having so much more difficult time with this. What makes a Dad great? Well, here is my attempt to find this out. Please remember that this is my opinion only, and these are from series I have experienced personally, so something like Bleach is not on here since I don’t follow it enough to say I know the characters.

I know some of you will be mad at me for putting him at this spot, but I have a reason. Daikichi decided to raise Rin despite her not being his child or having any reason to. BUT in the manga things get really weird in Rin’s later years. And I cannot unsee that…. no matter how I wish it did not go there…… 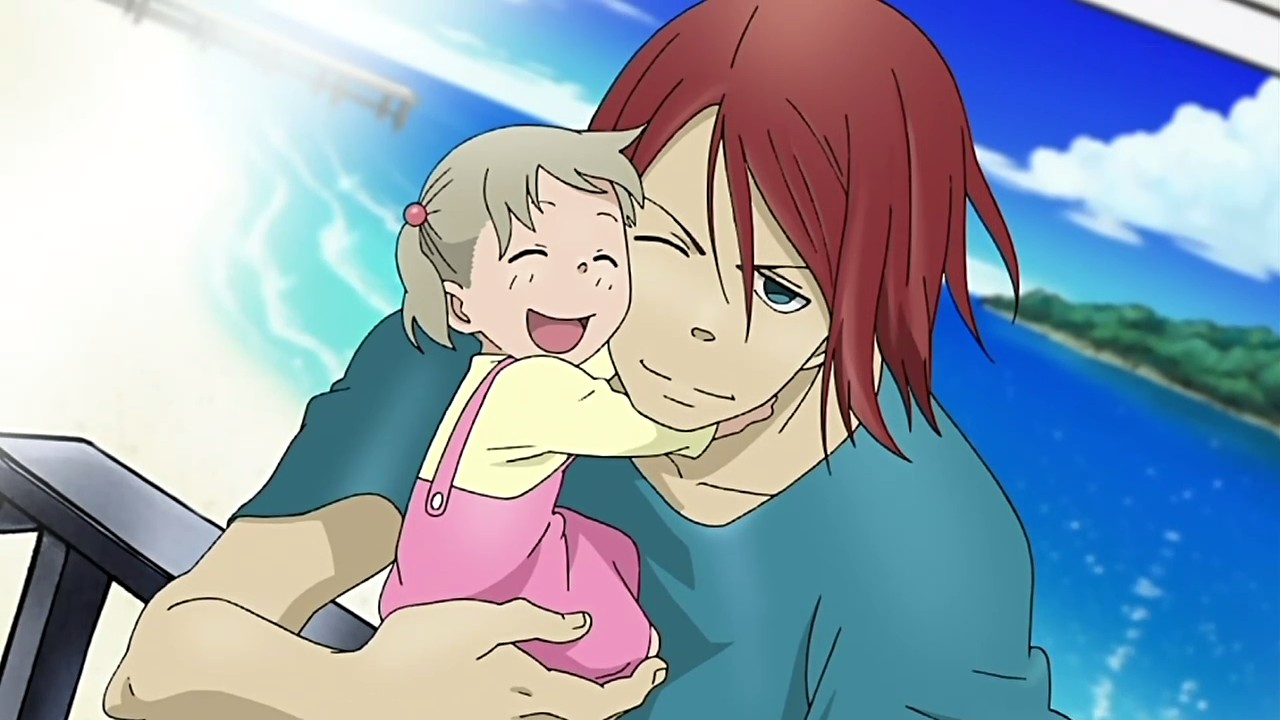 Death Scythe is probably the most… social of the dads in this list. He is a serial womanizer, and his wife left him. Although his relatiohsip with his wife is no longer a thing, he is extremely devoted to his daughter, although she is constatnly mad him. It also helps that he is one of the greatest weapons in Soul Eater world.

Soujiro is mainly here because I have a feeling I might turn out to be like him. He is father to the protagonist Konata, an otaku to the core high school girl. And the source of here otaku-ness is this guy. He is an otaku and raised Konata by himself after his wife had passed. He is supportive of his daughter, wants to be chill with her friends, and is generally a good guy. Although he did traumatize his niece, Yutaka, by pooping with the door open.

Yagami Soichiro is model police and model father. He works his ass off for safety of Japan as well as his family. He is ever so proud of his son, and that is where the problem begins. If you don’t know somehow, his son is Yagami Light, the Kira, the mass murderer with magic killing book Soichiro is after. He becomes furious when L suggested that Light may be the Kira, and until his death, he believed that his son is innocent. Sadly, his son did not care for Soichiro anywhere near how Soichiro loved him, to a point where Light drove his father to his death. 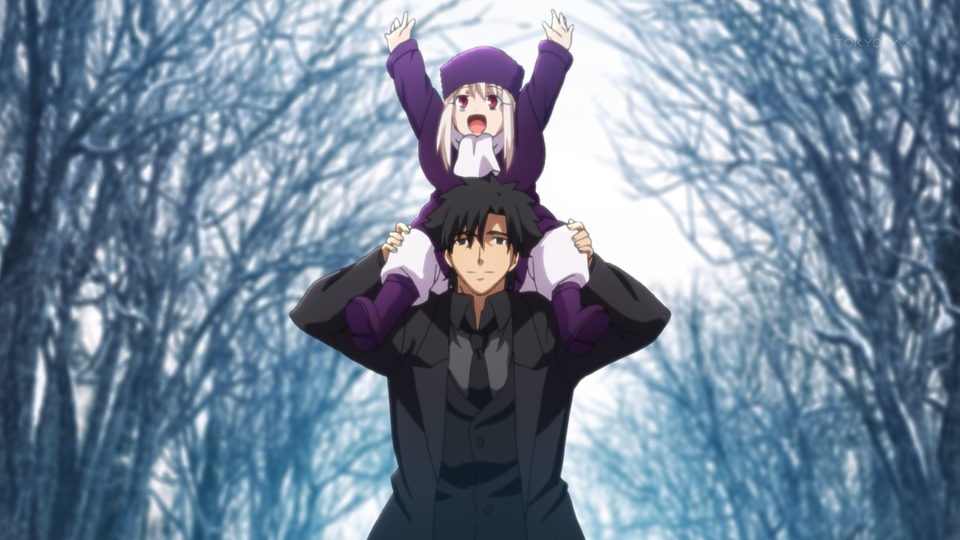 Kiritsugu is a complicated man. He is so good at living 2 lives, the one of assassina and one of family man. Although most of his scenes were of him as a heart less cruel assassin, he is genuinely sweet to thos he cares about, namely his wife, his daughter and his son. In Fate/ Zero, you see his relationship with his baby girl Ilya, and it is clear the two love each other. And with Shirou, he was a great father and raised Shirou with good morals and some mnagic training. He is the inspiration for Shirou to become hero of the world.

5. Segawa Yuuta from Papa no Iukoto wo Kikinanasai

Again, not actually a father, but an uncle instead. Yuuta is a 20 year old college kid who has a sister that married a guy with kids. And having a child of her own, she is now part of family of 5. Unfotunately, there has been an accident and Yuuta’s sister and her husband is missing due to plane crash, and most likely dead. Noit wanting the kids to go through parentless childhood like he and his sister did, Yuuta steps up to take care of the children as his own despite his lack of experience, but damn it he tries. Being in his age I cannot believe the commitment he made and how much of it he actually delivered. For that he is on this list. This man has one of the most hyper girls as his daughter. He is adoptive father to the protagonist and the titular Yotsuba. He works as a translator from home so he is usually with or very close to his young daughter, who does not go to school just yet. This man is very chill, often seeing playing with his daughter and sometimes even as Pantsu Man, but when Yotsuba does something wrong, he puts his foot down and scolds Yotsuba so she understands what she did. On his days off, he oftne takes Yotsuba and the neighborhood girls to fun places like the beach, to fishing, to camping, or to watch hot air balloons that takes place in ungodly hours of the morning.

3. Edward Newgate from One Piece

There are a lot of great father figures in One Piece, but White Beard wins out for me. Even in his early years as a pirate, all Newgate wanted was a family, he doesn’t care about power, he doesn’t care about wealth, or even his own safety; he just wants a place to belong. And he found that with his pirate group, where each member treats each other like family and he is their patriarch. He truly loves his comrades as his children, to a point where he will easily declare war against the freaking World Government to save one of his sons. Even when his son was lead astray and stabbed him, he forgave. The one golden rule he upholds is never to kill a family, and that is what Blackbeard has done. 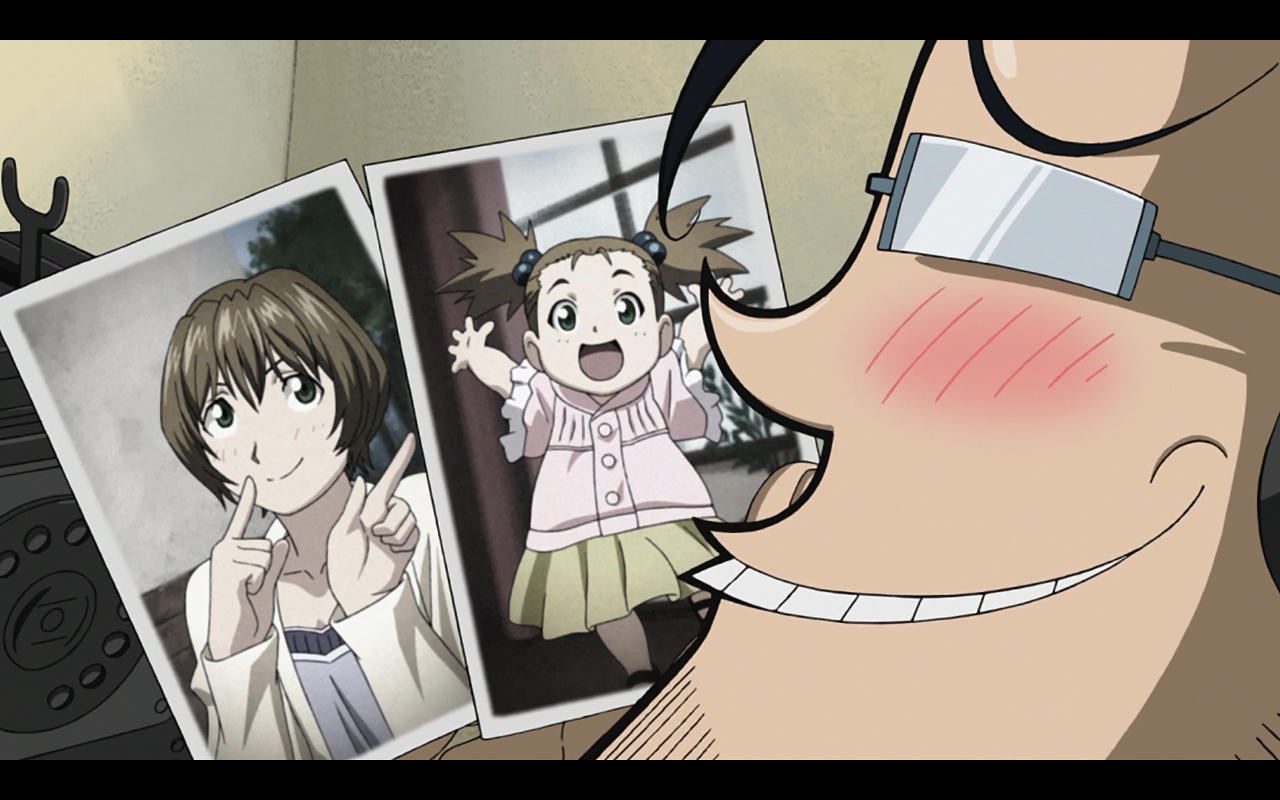 You all know who he is. He is obsessed with showing off his wife and daughter to just about anyone. I couldn’t resist putting that dumb face of his when he is looking at photos of his wife and daughter. He worked his ass off to support his family and his family loves him back. And his love for them was what ultimately got him killed. He could have survived Envy’s attacks if he constantly damaged Envy. Sadly Envy transformed to his wife and he just could not bring himself to fire. That funeral scene was so hard to go through. Oh the rains.

Yes, he didn’t die for his family, but I don’t think that is a requirement. He was there for his wife and daughter for almost everything. He easily gave up his passion for theater if it meant he can watch over his sick fragile child. He and his wife still has the lovey dovey, almost cringe worthy, flirtations. And once he became a grandad, he was the best grandad. When Tomoya was unable to take care of Ushio, he and Sanae took care of Ushio without batting an eye. To Tomoya, he is a great father-in-law, including him on most family occasions, constantly feeding him and pretty much being a parent to him as well.

Hope you liked this one!