I have not played FFXII yet, so we are skipping to FFXIII…

Final Fantasy XIII is Square Enix’s debut to the new generation of gaming. FFXIII was released on December of 2006 for PS3 and Xbox 360, and was later ported to PC in 2014. The version I played were on PS3, and since it was on sale, the PC port.

Lightning aka Claire Farron is the protagonist of this installment. She is very stoic and is often referred by fans as Female Cloud. She is very stubborn and hellbent on doing whatever she can to protect her sister. 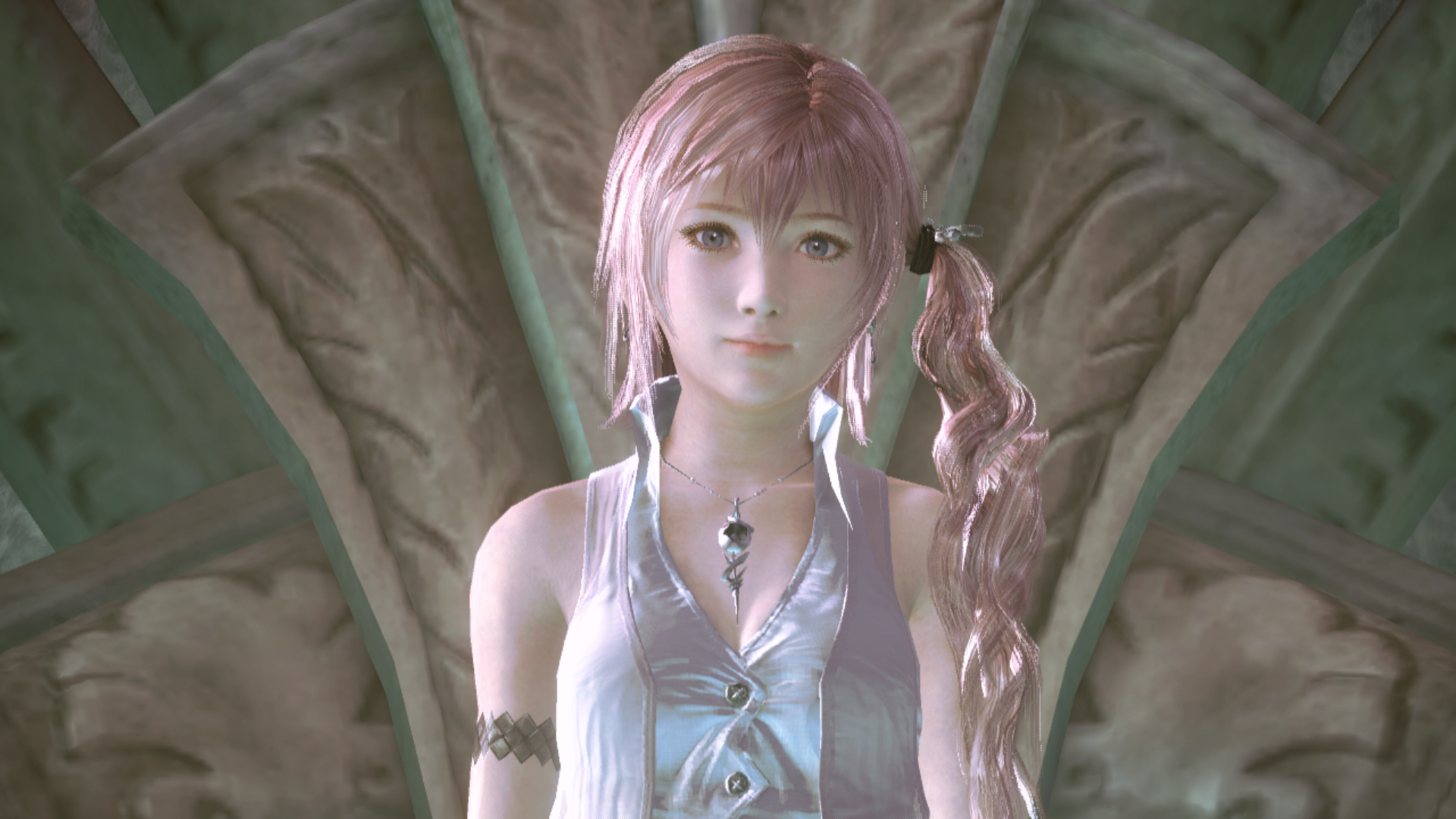 Serah Farron is Lightning’s little sister. She is fiance to Snow. She is branded by the Fal’cie and becomes a crystal, jump starting Lightning’s quest to beat the gods and save Serah. 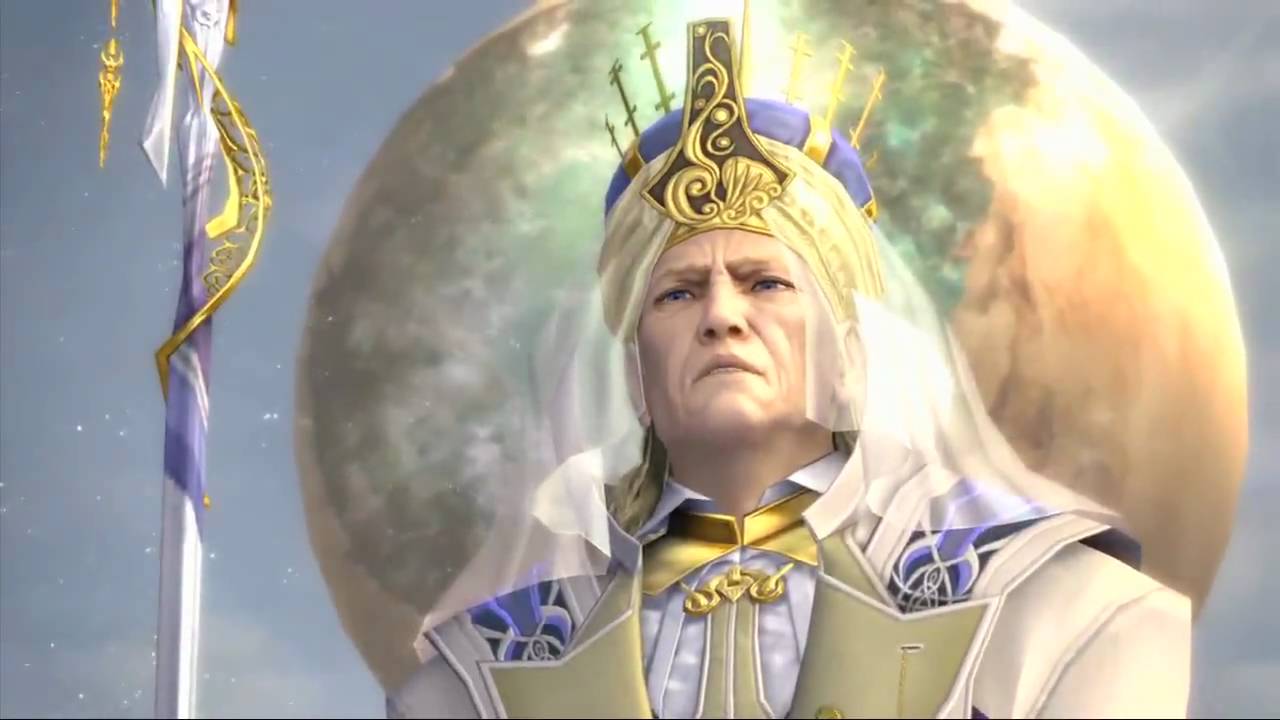 Galenth Dysley aka Barthendelus is the antagonist of FFXIII. He is almost completely forgettable. I could not remember who was the bad guy for awhile.

In the world of FFXIII, there are these mechanical gods called Fal’cie, and their hand picked slaves L’cie. L’cie receive special powers in exchange for their service. Snow’s fiance and Lightning’s sister, Serah, is a L’cie that became a crystal. To free her from her fate, Lgihtning and co decide to defy the gods and free the world from their grasps. 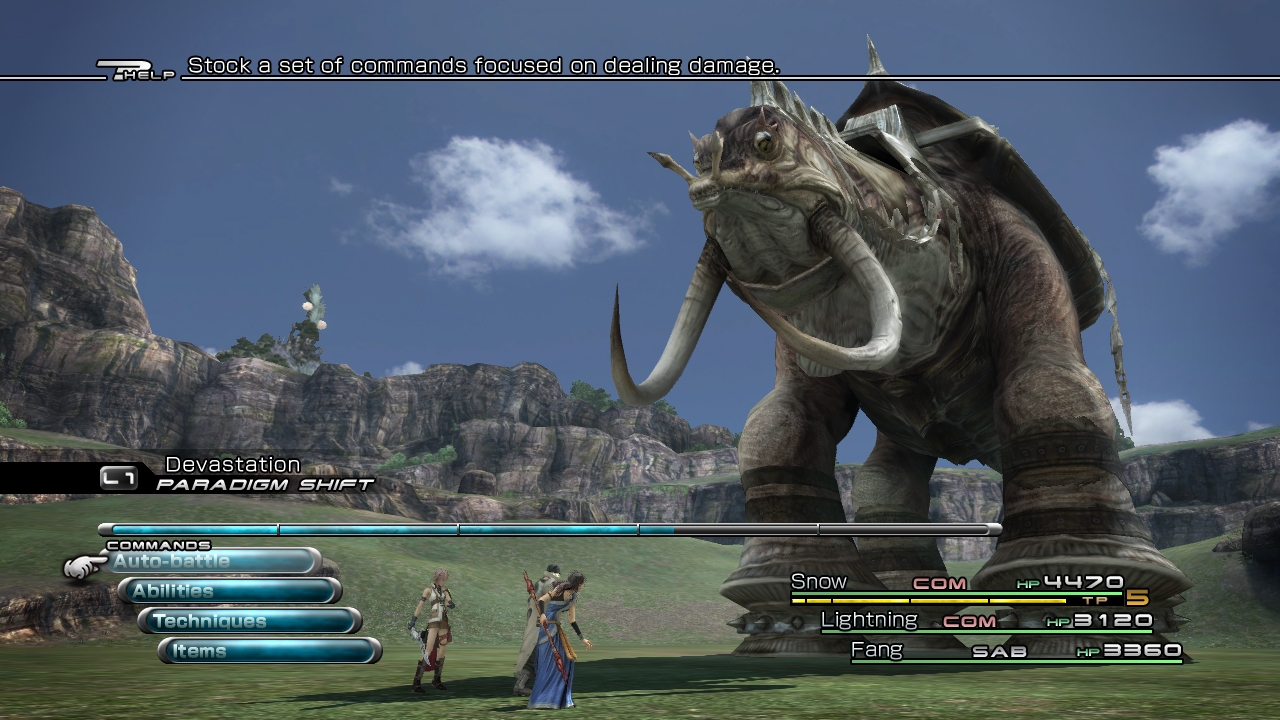 Of the Final Fantasy games, this one is the least hands-on game. See, of the 3 characters that are active in your party, you only control one. And you “suggest” move sets to other party members.

This wasn’t ideal, but I was okay with that. But, there is this thing called the Auto Button. And this breaks the game. I know you can turn this off, but for game designers to put this as the default was a mistake. This shows that the default way to play this game is to turn your brain off and spam you button, and switch tactics once in a while. 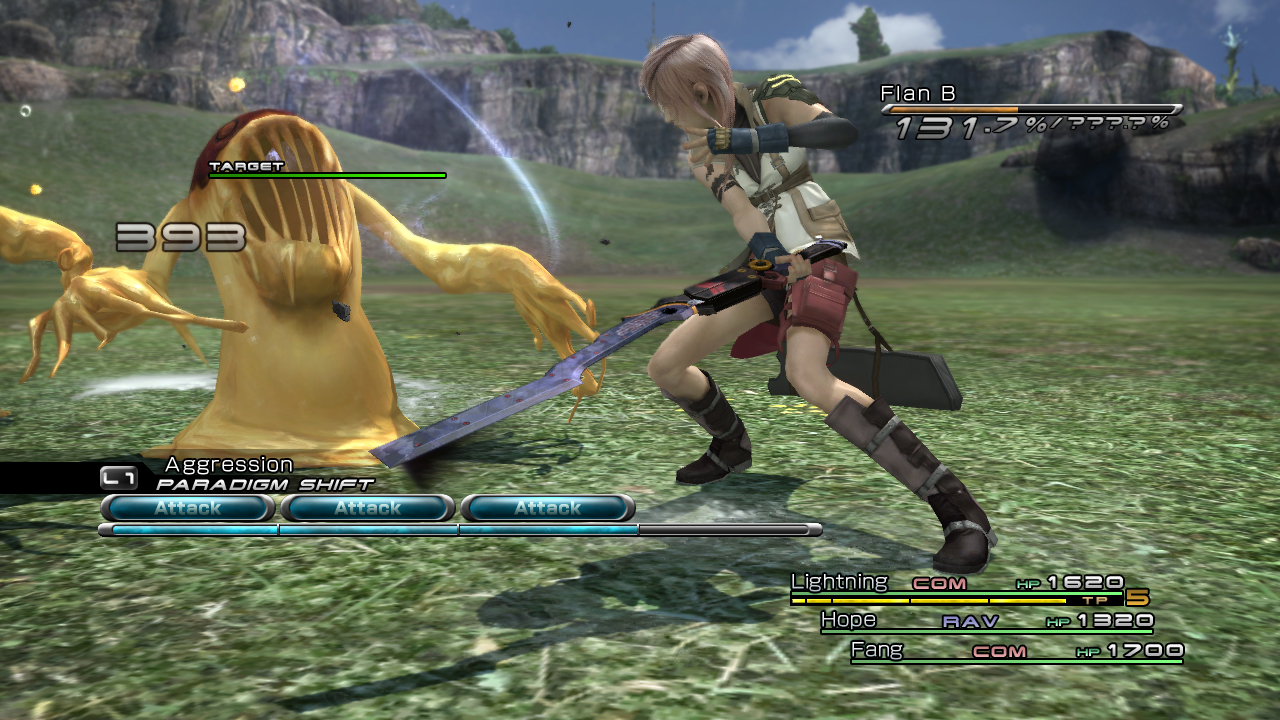 Rather than attack, wait, attack again, FFXIII lets you string combinations of the moves before releasing them on the target. This makes the attacks more fluid and cinematic. It was an interesting change of pace opposed to traditional turn based RPGs.

Paradigm Shift is the new job system. Rather than having characters have jobs they are bound to, the characters have positions that can easily change through every battle. This is how you “suggest” move sets for your party members.

After each battle the party is fully healed. This means you do not have to use mana or items in the open world as everyone will get fully healed once the battle is over. While this is convenient, this does take away some tension as battles are less about survival and preparation for the future. 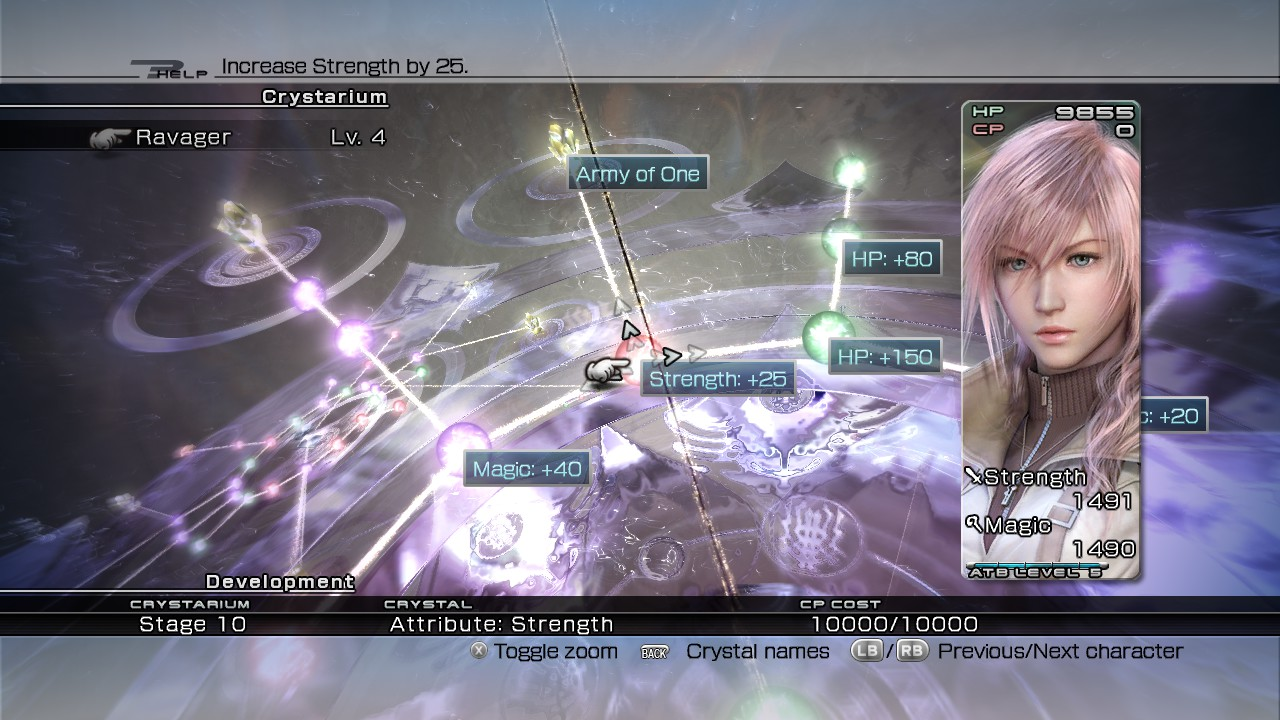 Crystarium is this game’s version of FFX’s sphere grid system. Unlike the FFX’s system, all of the “jobs” are compartimentalized so that you have to level each job separately. So you can’r really jump around as you did in FFX. Also, it is more “streamlined” meaning you have less control. Lastly, not all of the jobs are unlocked from the start like how it was in FFX. So if you wanted to make a Tank Vanille or Debuffer Snow, that is locked until much later in the game. It is prettier and cleaner, but that comes with sacrifice of freedom. 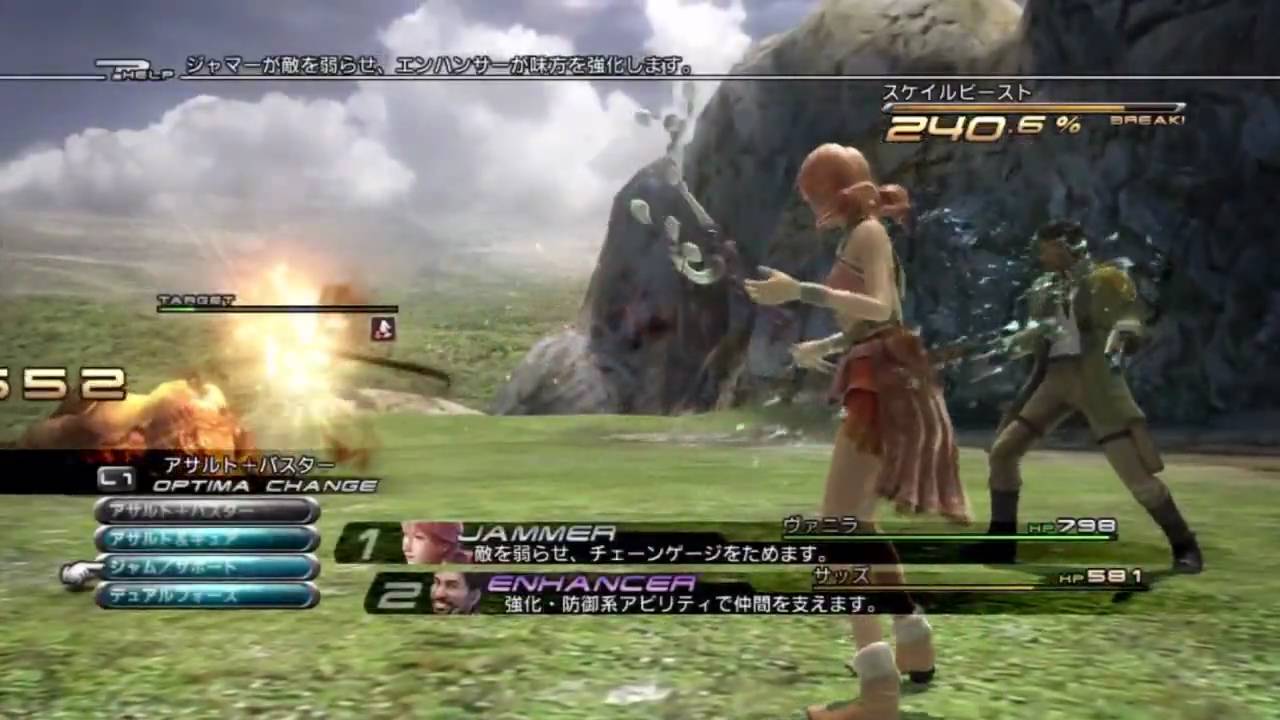 Let’s start with my biggest issue, the gameplay is not really engaging. I felt that I was suggesting the actions rather than being part of it. Sure, this is a JRPG, and you don’t have manual control over the characters’ actions, but none of the other FF games made me feel like I was watching rather than playing. I found my self spamming the x button or the mouse constantly, and I don’t think that is a good thing for an RPG to be having.

This is something special to the PC port of the game. I’ve played the PC port with mouse and keyboard, and it is very clear that the controls were not optimized for that. To scroll through the menu, you have to use the scroll wheel to do that, I’ve never seen this before. Why can’t I use a simple cursor? And the camera was so quick that it was hard to use, and worse yet, the options do not let you change the sensitivity of the camera movement. 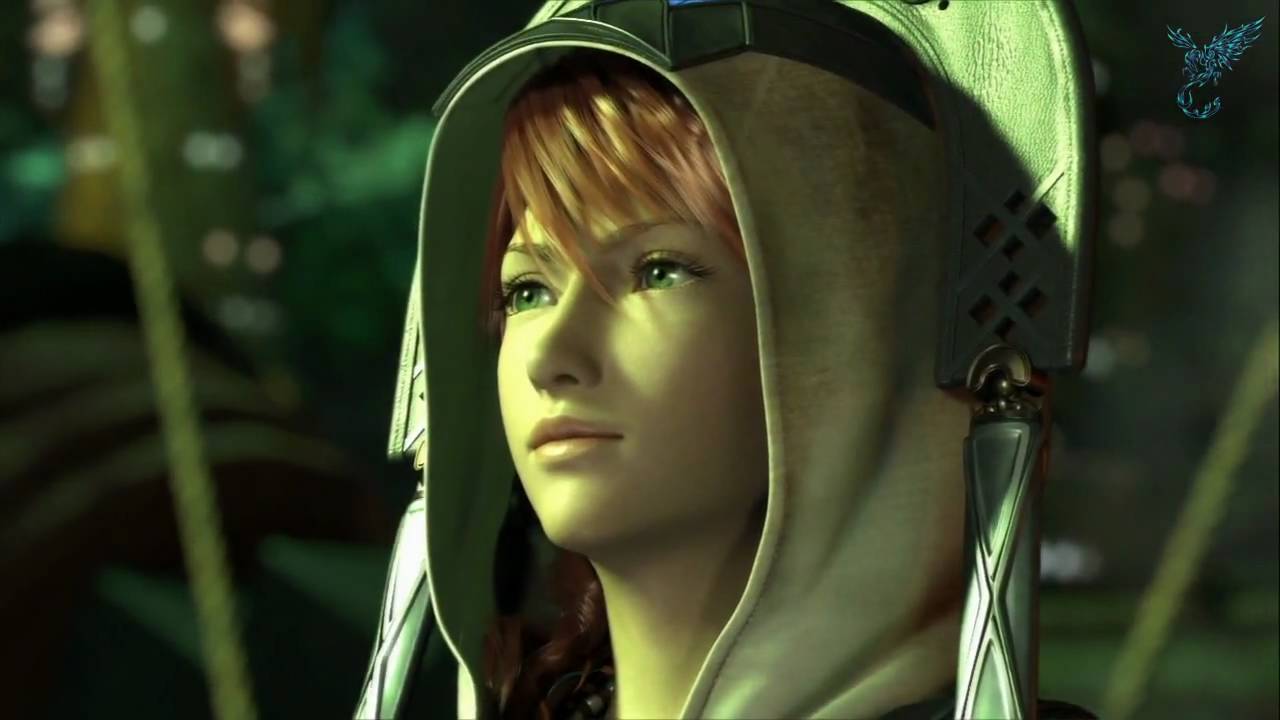 The beginning of the game is really weird since there all of the true move sets are locked away until the part of the story, your characters will only have bare minimum move sets. This means mages like Vanille and Hope have nothing but Attack. Sure this section is not terrribly long, but I was begging for the real game to begin where I have actual move sets.

In the beginning, the game throws a lot of jargon at you. During times like this, a fish out of water character, like Luke from Star Wars or amnesiac Geralt from the Witcher series, would be helpful, but there is not one here, Vanille is closest, but she doesn’t ask too many questions. Fal’cies are mechanical gods that provide for the people, so why is the military trying to kill them? Oh, there are 2 militaries, Psicom and Guardian corp? How are the 2 different? Why is there a riot in the beginning of the game against Psicom? Do people worship these mechanical gods, or do they hate them? I’m so confused. Some of these, not all, should be addressed from the get go so you don’t have to ask so many questions that the game doesn’t answer. Other Final Fantasy games had a lot of jargon, but I’ve never been this lost: Yevon worships the Faiths and Sin is punishment for the machinas, Shinra is an evil corporations with soliders from…. SOLDIER, there are 2 planets with names Gaia and Terra, and so on.

When it comes to villains, FFXIII falls out flat really bad. In the previous games, the villains were so iconic: Garland, Emperor, Kefka, Sephiroth, Ultimecia, Kuja, Seymour, Sin,  and so on. Each of these villains were memorable and known for something rather than just being a final bad guy. But FFXIII has… the pope? 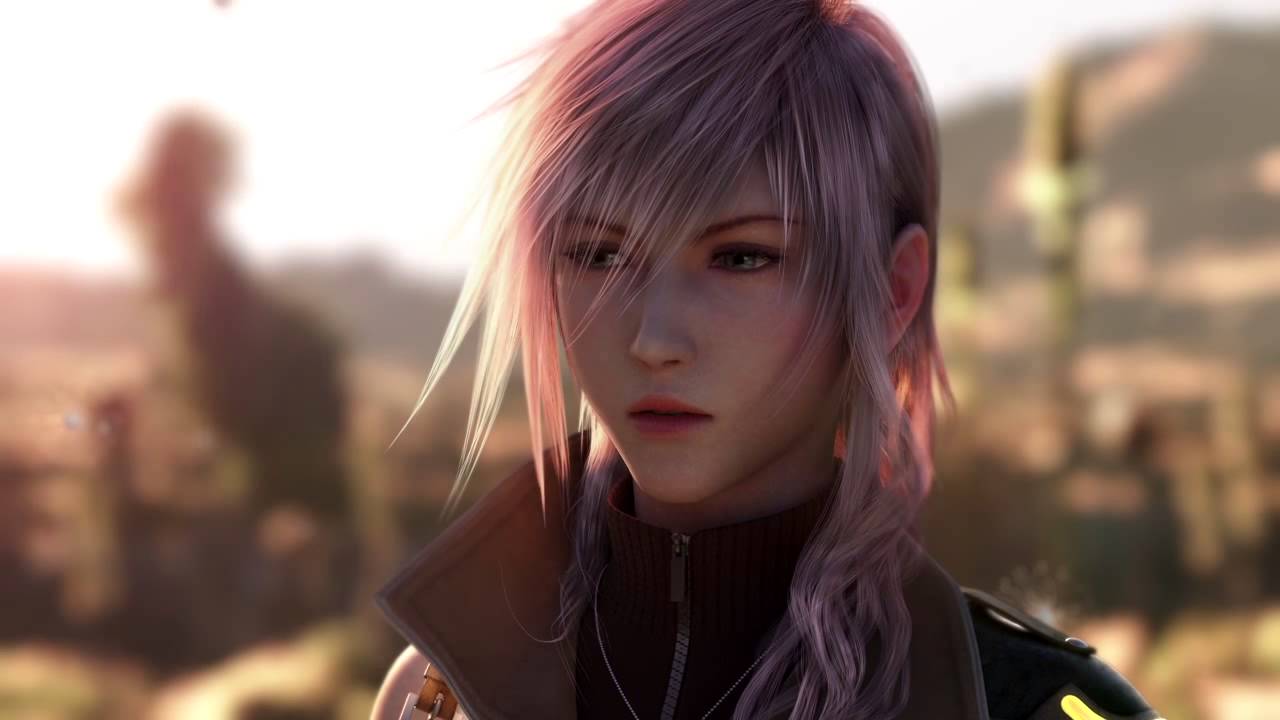 Compared to other Final Fantasy games, this one seems like it is taking itself way too seriously. In FFVII, there was a scene where Cloud cross dressed and took bath with macho men. In FFVIII, there were a lot of cute moments between Squall and Rinoa. In FFIX, Zidane makes moves on Garnet. In FFX, Tidus  always tries to lighten the mood. The world of FFX was a lot more grimmer but more livelier than the world of FFXIII. FFXIII didn’t have to take itself so seriously. Lightning, the protagonist, has a huge stick up her butt and constantly berates the party. Sure Vanille tried, but here attempts looked rather forced or just straight up awkward.

I was watching this one video, and it mentioned that the original protagonist of the game was suppose to be Vanille and not Lightning. And replaying the game, this makes a lot of sense. It is Vanille’s voice that narrates the game, not Lightning’s. Little spoiler alerts………………………. it is her that ends up saving the world at the end of the game. And it is her that gets the romantic partner, none of this is actually done by Lightning. I am not saying the protagonists should always get the romance, glory of saving the world, and what not, but it is clear that Vanille was given more focus than Lightning. But I guess the upper brass decided that action hero is more important that making narrative sense.

Despite all these glaring flaws, I have a soft spot for this game. Hell, Lightning made me realize I have a thing for armpits…. 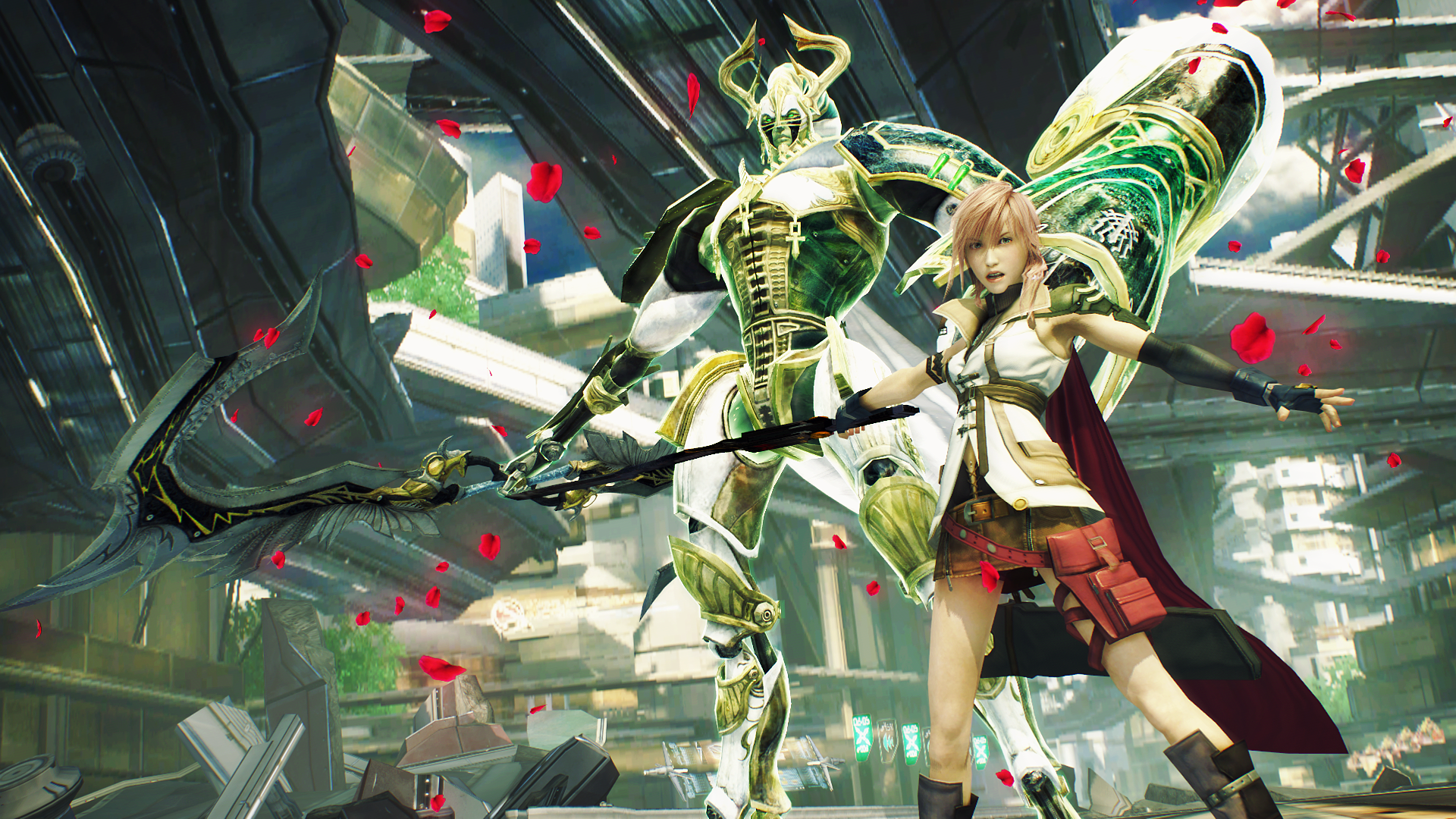 Visually, the game is beautiful. If you thought FFX looked good, this one will blow your mind. The characters models moved away from some awkward faces made by FFX to something that resembles real people.

I really liked the music from this game. From the international trailer’s My Hands, to the battle theme “Blinded by Light” and the more soothing “Sunleth Waterscape”. While the iconic victory music is removed, I liked the overall sound of the FFXIII. 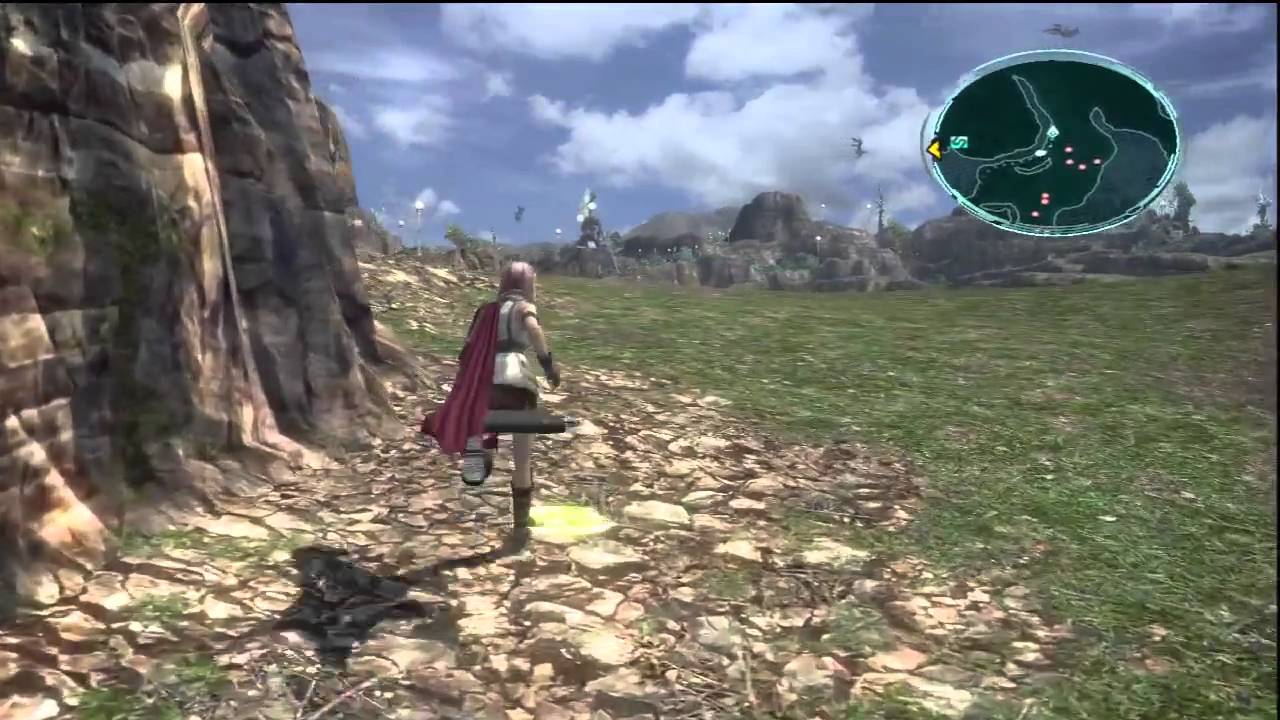 Unlike the previous games, FFXIII supports camera control! This is pretty nice after so many of the titles did not have this feature. Sure this was not the greatest camera I’ve seen in a game, but it freaking works. Now if I miss an easy to spot item, it’s my damn fault. This was much need features, and I hope the Final Fantasy series keeps using it. 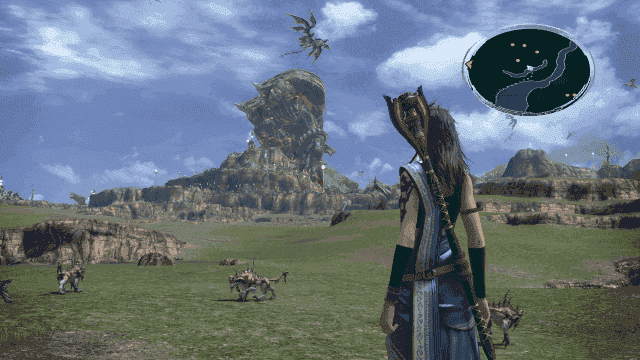 I really enjoyed the removal of the random encounters in this game. Now the enemy are visible prior to engaging in a battle with them. Sure, this means that it is harder to grind, those of you who know me, I actually like to grind in these games. But the constant barrage of enemy encounters missing was fantastic. I always feel that there is a sweet spot between too little random encounters and too many random encounters, but I have not played a game that hit this spot just yet.

Not really a good point, but something that needs to be addressed: I did not mind the linear-ness of the game that much to be honest. I mean Final Fantasy X was pretty linear as well. From the narrative point of view, the linear level designs made sense. The characters have to act quickly. 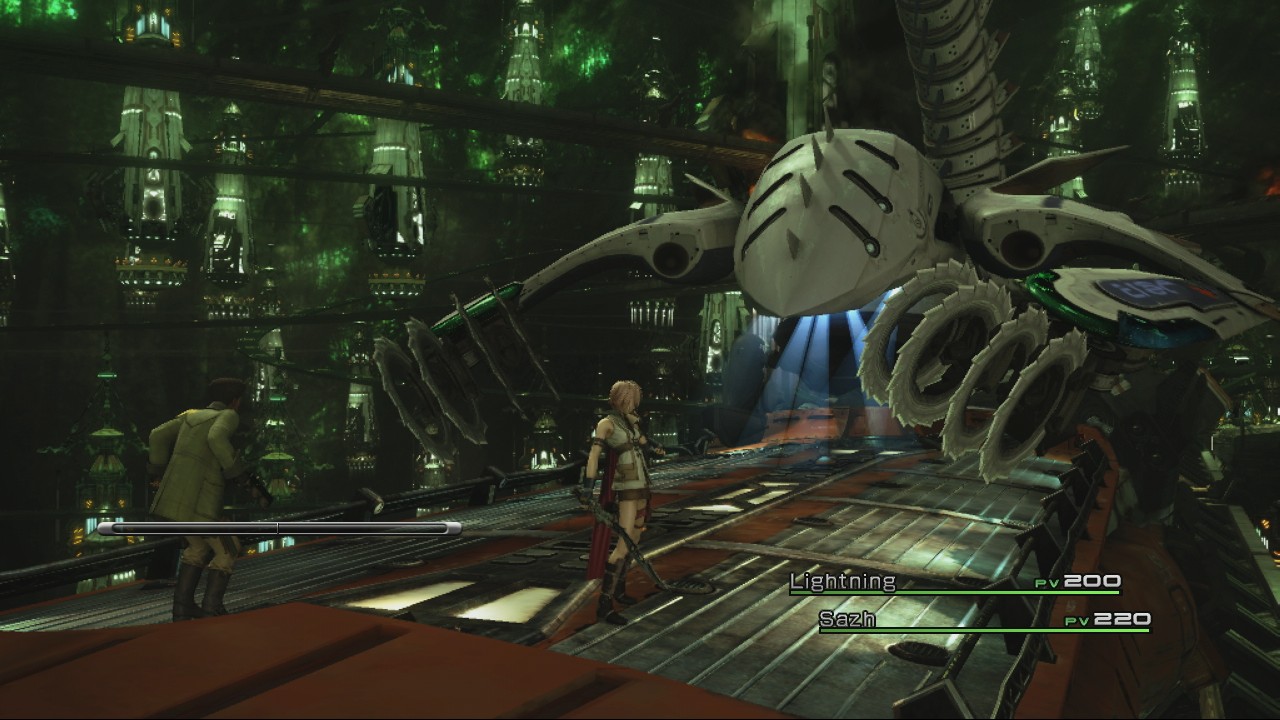 I cannot help but feel that FFXIII was a soft reboot of FFVII, Square Enix’a most iconic game. Hear me out, both start with a train sequence only to find themselves fighting a mechanical scorpion. Protagonist is weather named hero/heroine wielding a sword who is an ex-SOLDIER (did you see what I did there) assisted by a black guy with a gun. It was a sort of deja vu, although it wasn’t as similar to FFVII as the Force Awakens was to the New Hope.

I feel that FFXIII is being regarded as the worst thing that happened to Final Fantasy series ever. Although it is not my favorite, I just cannot bring myself to hate it. As of now, FFX-2 is the worst in my book, closely followed by FFXIII-2. FFXIII is the first Final Fantasy game I’ve played shortly after launch, I played FFVII, FFVIII, and FFIX by then but they’ve been out for years. I had high hopes and I remember playing and anticipating this with my friends, so for that it holds a spot in my heart.