“Turn those corners up!”

World of Final Fantasy is a love letter, more closely fan service, from Square Enix to long time players. What I mean by that is has cameos from all the heroes from the past Final Fantasy games helping you out. The game was released world wide for PS4 and PS Vita on October of 2016. I played my version on my PS4. 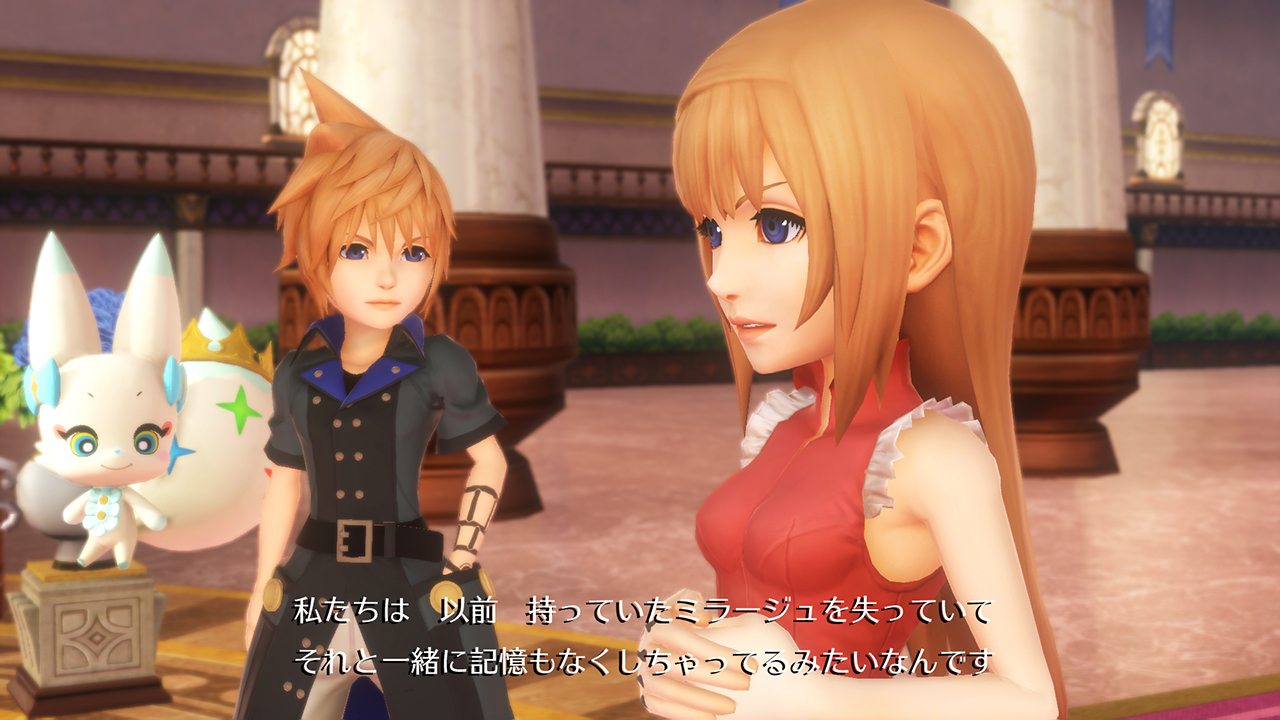 Lann (boy) and Reynn (girl) are the dual protagonists of this story. Like many FF games, they suffer from amnesia of sorts. Lann is extremely stupid, and no, he is not Cloud. Reynn is more uptight and is there to make sure Lann doesn’t get too stupid.

Enna Kros (left) is the god of World of Final Fantasy. She sets up the plot in the beginning of the game for our heroes to explore and gives Tama (right) as their starter Poekmon. Tama is a the game mascot with a serious speech impediment that never gets funny. 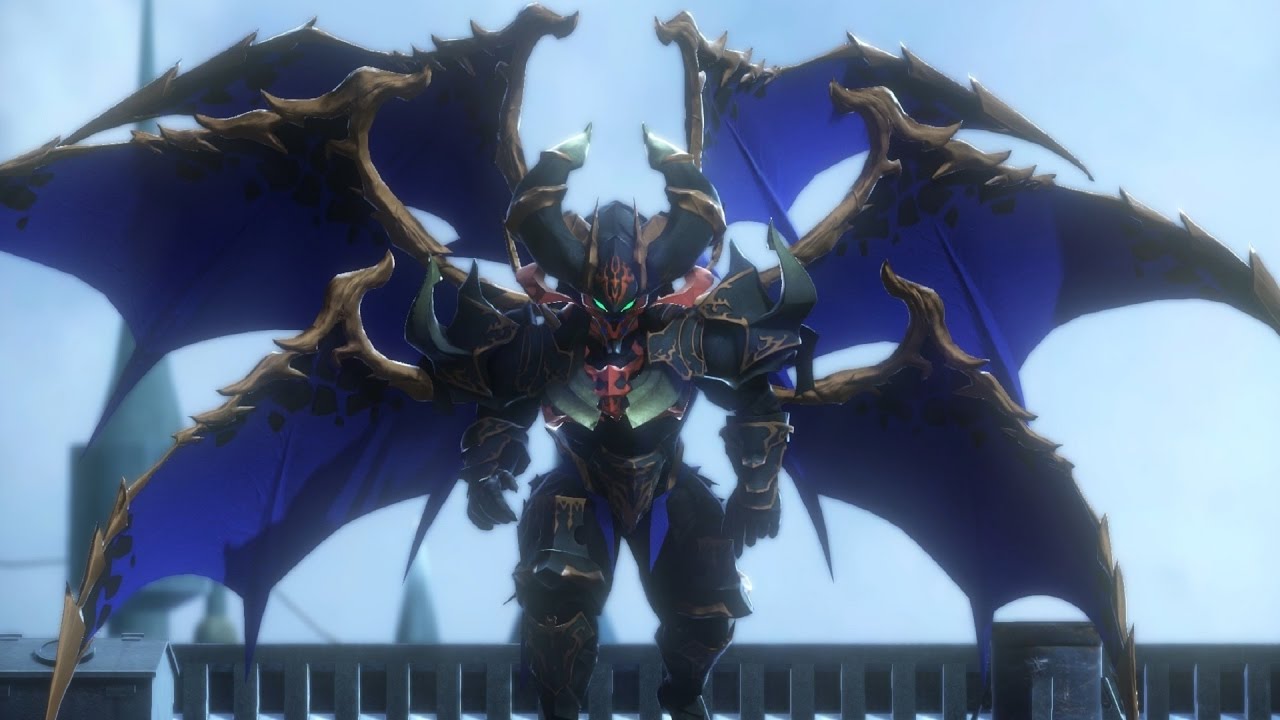 Brandelis is the main antagonist (?) of the story. It is really unclear. 20 or so hours into the game, he meets the twins for the first time. His voice is awesome though!

Lann and Reynn wake up, twice. And find out that their world is empty. Then they meet god who tells them they were Mirage Keepers who have to catch all the mirages to finish the Pokedex…. I mean get their memories back…. okay.

Then God opens portal to a fantasy world of Grymoire and says go. So the story starts.

The story is rather confusing as there are like 4 or 5 things going on at the same time. (1) Well the first plot introduced is that the twins realize that they are missing their memories. (2) The second plot is this Bahamut Federatrion is taking over kingdoms and cities so the independent cities have to stand up to them. (3) The third plot is that the twins’ mother may exist within this world and the twins want to find her. (4) And there is talk of not one, but two prophecies that outline the future. This is not mentioning every FF cameo characters having their own little adventures like: (5) Rikku and her treasure hunting, (6) Refia and her stay at the ice region, (7) Vivi and his adventures of making friends, and so on…..

And all this is happening with this strange meta narrative, I will talk about that in a bit.

The gameplay is Pokemon meets monsters of Final Fantasy, but the major difference is you use Prism cubes instead of Pokeballs. Jokes aside, the point of the game is to “Catch’em all”.

The games combat is “back to the basics” approach that was used up to Final Fantasy X, meaning good ol’ fashion turn based RPG. While bringing in the auto battles and simplified combat menu from other RPGs. I will explain.

The game’s combat has 2 menus, the Simple menu and the Classic menu. Simple menu is having actions mapped to your face buttons, so you will always have only 4 options to choose from, but this will speed up the combat.

While the Classic menu brings up the menu many long times players will be used to. This will show every action the characters can take, from Abilities section that holds Black and White magic to full on Item list. This menu is necessary if you want to make more sophisticated plays.

The mirages in this game have their own “Mirage Boards”, think of them as simplified Sphere Grid from FFX.

Probably the most important aspect of the game is arranging your party. The Mirages, aka characters you catch and raise, fall into Small, Medium, Large, and Ex Large sizes. Their sizes determine how they can fit into the party. Lann and Rayne can transform between their chibi self and regular self, switching between M and L sizes. 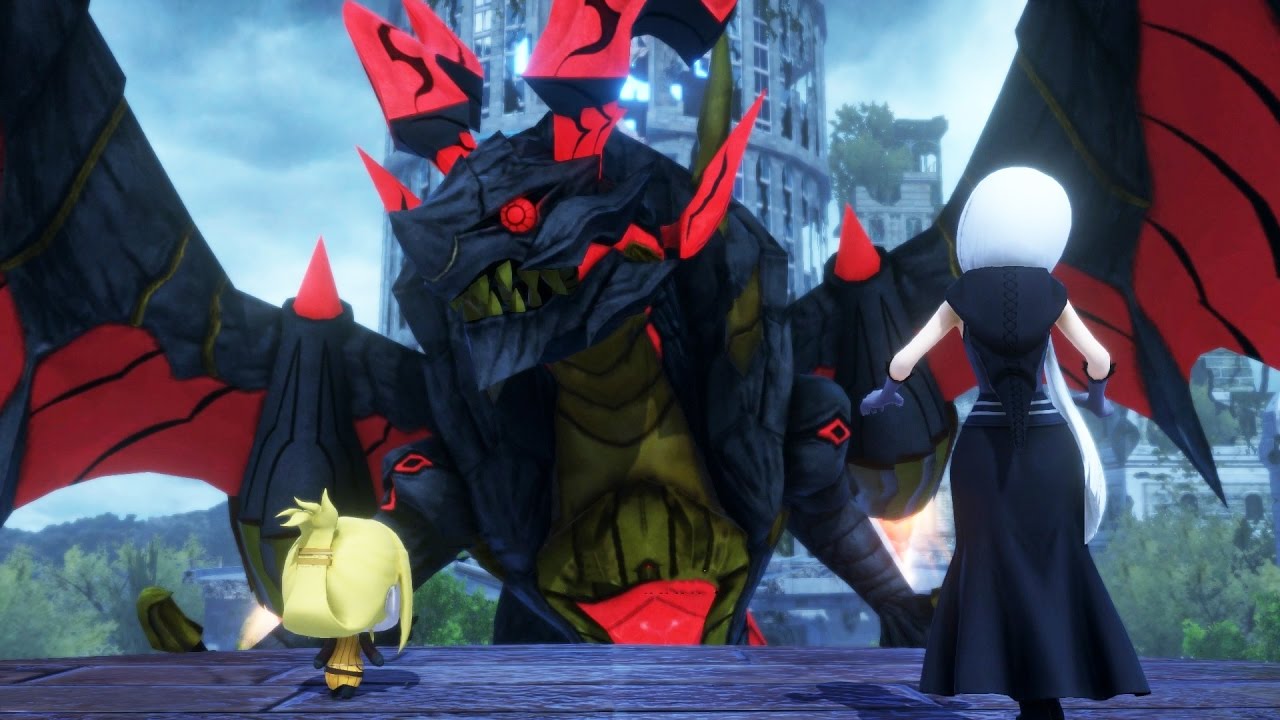 This may be a minor thing for some, but it bothered me a bit, that is the voice acting. Don’t get me wrong, some of the voice acting in the game were great, like Brandelis was great, but Bahamut was so cringey I had to fast forward scenes with him.

The game lacks certain features that seem like a no-brainer. One of the nicest feature in the game is to speed up the battles. You do this by holding down R1. But you have to hold it down. Why can’t we toggle to turn fwd on and off? Also, is there a reason why there is only one save file? I am not asking for 20, but maybe just more than one?

From time to time, there are these anime sequences, and it clashes with the style of the game so much. The in game models are freaking beautiful, but their anime counterparts are sub-par. I am not saying anime is inherently worse, if you’ve seen the rest of this blog you’ll know I have obsession with the media, but the anime parts are just not well done.

The story quickly makes it clear that Reynn is more of the protagonist rather than Lann. For one, Lann is beyond stupid, he is so dumb, he cannot comprehend most of the conversations that take place, and trust, there are a lot of conversations. So Reynn has to be the smart one and the emotional center. Being dumb isn’t bad, just look at the goof balls from Baccano, or half the crew members from One Piece, but it seems like all of the important scenes were just dumped onto Reynn because Lann couldn’t handle them, and that is bad. Dumb characters can be emotional core or provide something the smarter characters cannot, but this was not the case in WoFF. 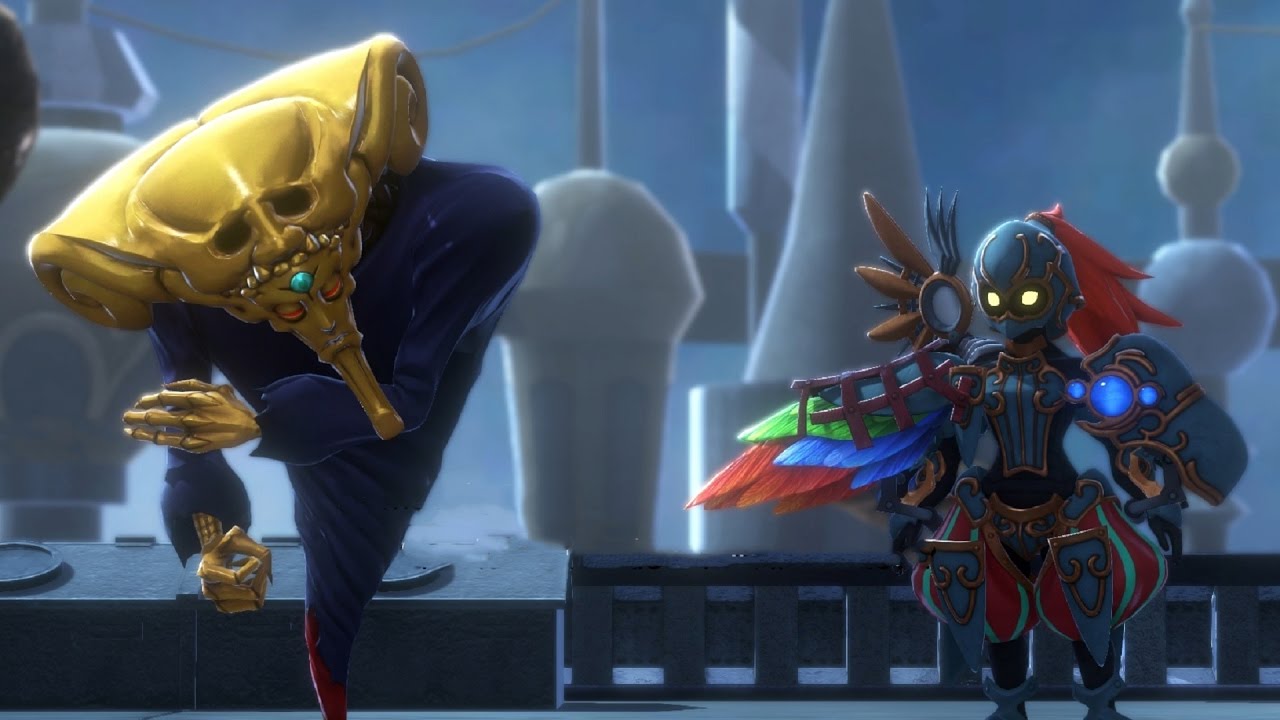 This may be a spoiler, but if you’ve played and Final Fantasy games, or any JRPG game, you know that the final boss battle will be multi-layered onslaught of fights. Well, WoFF definitely has that. The final encounter consists of 5 consecutive boss battles. But only the first and the last boss battles gave me any trouble, and this is not because they were hard, but because those bosses spam status ailments. If you know the trick, all 5 bosses are easy, but the status ailments were so goddamn annoying. I don’t mind cheap bosses, but the final boss shouldn’t be cheap, they should be hard. It was a sour ending to otherwise an extremely solid Final Fantasy game.

Well let’s get the obvious one out of the way first, the game looks freakiong gorgeous. The grass are so green and crisp, the stones look dusty and dry, everything looks really great.

If you’ve been seeing some of my other stuff, you may realize that I like cute things. And here is no exception. Seeing my favorite characters from the past in chibi form was just adorable. Seeing larger monsters get the same treatment was also very cute!

The music was pretty good. There were good combination of old and new. As this game features characters from older titles, when they appear or in a region inspired by previous games, the game shamelessly plays the themes from those titles, I liked that. Of the new pieces, the main battle theme was my favorite, it felt like the middle ground for both old and new.

It was quite wild in that every character, even the most disposable NPCs, were fully voice acted. Not all of the voice acting were good, especially in the forced comedy bits, but some were quite well done. I think my favorite voice is the Tonberry from the Colisseum, his voice is so deep, and he sometimes says really silly lines in that deep serious tone, it was great.

My favorite part of the game would be watching the characters from different games interacting with each other. Yuna (FFX), Rydia (FFIV), and Eiko (FFIV) are all summoners and quickly form a sort of sisterhood, and they rely on each other for support, that was great. Rikku (FFX) and Bartz (FFV) feed on each other’s excitement for adventures and create extremely happy attitude while exploring a cave. Edgar (FFVI) trying to flirt with Faris (FFV) and getting shut down, only to have Vivi (FFIX) cheer him up.

On a similar note, being able to revisit areas from older games in fully redone HD was amazing. This gain contains Cornelia from FFI, Midgar from FFVII, Figaro from FFVI, Besaid from FFX and motherchucking Balamb Garden from FFVIII! It was a treat to behold. 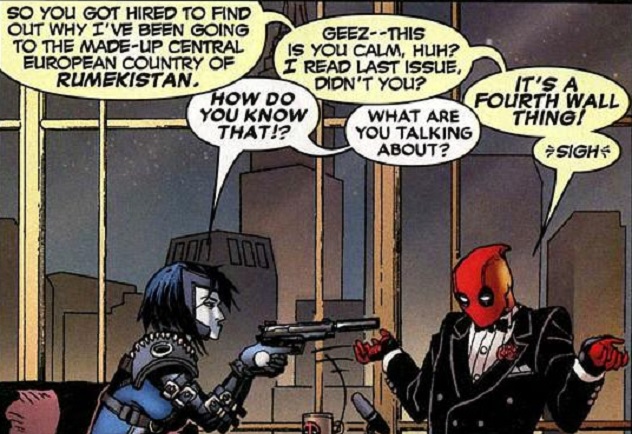 For those of you who don’t know, meta narrative is when a story is aware that it is a story and breaks the fourth wall, simply put, think Deadpool or sometimes Rick from Rick and Morty. Meta narrative is a … sensitive medium as anyone can do it okay, but only a few work out great.

The World of Final Fantasy has this very sarcastic and sometimes serious meta narrative going on. The most obvious was in the beginning of the game where Enna Kros, aka god, explains that she more or less made this game/world. And they talk about how she also made the monsters drop money so that it feels more gamey.

It doesn’t help that the protagonists of the story has lost their memory. And this makes up for some interesting dialogues between characters:

Above is a scene that happens rather early in the game where the twins meet Shiva, Ramuh, and Ifrit in a dungeon and says the words above. At first I thought the aeons/ summons/ eidolons were addressing the characters. And later I was thinking about the meta narrative and started thinking “were they addressing that to me as the player?” And both scenarios make perfect sense, as these 3 summons have been the main stay of the game since FFIII. 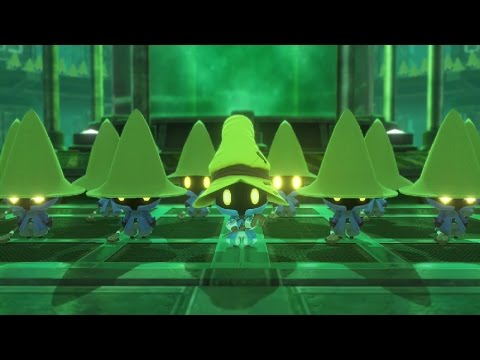 Another aspect I want to talk about is that the string of events that happen in WoFF, kind of felt like orgy of all of the plots from the previous games. Here is what I mean. Within in the game, the heroes have to defeat 4 super demons that represent the 4 elements as they move towards a crystal (castle), like how they were in FFI, hell some of those demons were Tiamat and Kraken. Another part is helping the other characters to shut down the Mako reactor in Midgar under time limit and being confronted by a newly formed army of Black Mages, merging the story elements of FFVII and FFIX. There are also a part where summoners/ espers were used to power up a machine, similar to the events in FFVI. There was a whole level dedicated to Big Bridge from FFV.

But here is where I am not sure where the fan service ends and the meta narrative starts. As soon as I met the first two summoners and they disappeared, I knew that thewy would be strapped onto some sort machine.

I came into this game thinking it would be a trashy cash grab made by Square Enix, I mean so many games are these days. But what I got was a genuinely good RPG filled to the rim with delightful fan service and creators having fun with the material as well as poking fun at the series. It was great.

Unlike what happened with Final Fantasy X-2, I did get the True Ending for this game. Well, it is more closely second ending. The first ending was alright but it was lackluster, especially for a Final Fantasy game, but the True Ending final battle was the good old galactic scale fight to save the world, and I was happy with that.

I had a lot of fun with World of Final Fantasy. If the chibi cuteness does not alienate you, and you like RPGs, you should give one a chance. I did, and I am glad I played it.