I actually didn’t plan on watching this, I just started randomly, at 2 in the morning, binged watched what was out, then continued….

Gabriel DropOut is an anime adaptation of the manga of the same name. The manga series is written by Ukami and the anime series was created by studio Doga Kobo. The series consists of 12  episodes and aired from January 2017 to March of 2017.

Tenma Gabriel White aka Gabu is the protagonist of the show. She starts out as the purest being in existence only to discover gaming and now is cynical lazy gamer.

Tsukinose Vignette April aka Vigne is Gabriel’s best friend. Ironically, she is a demon. Despite that, she is the nicest, purest character in the show, ironically. 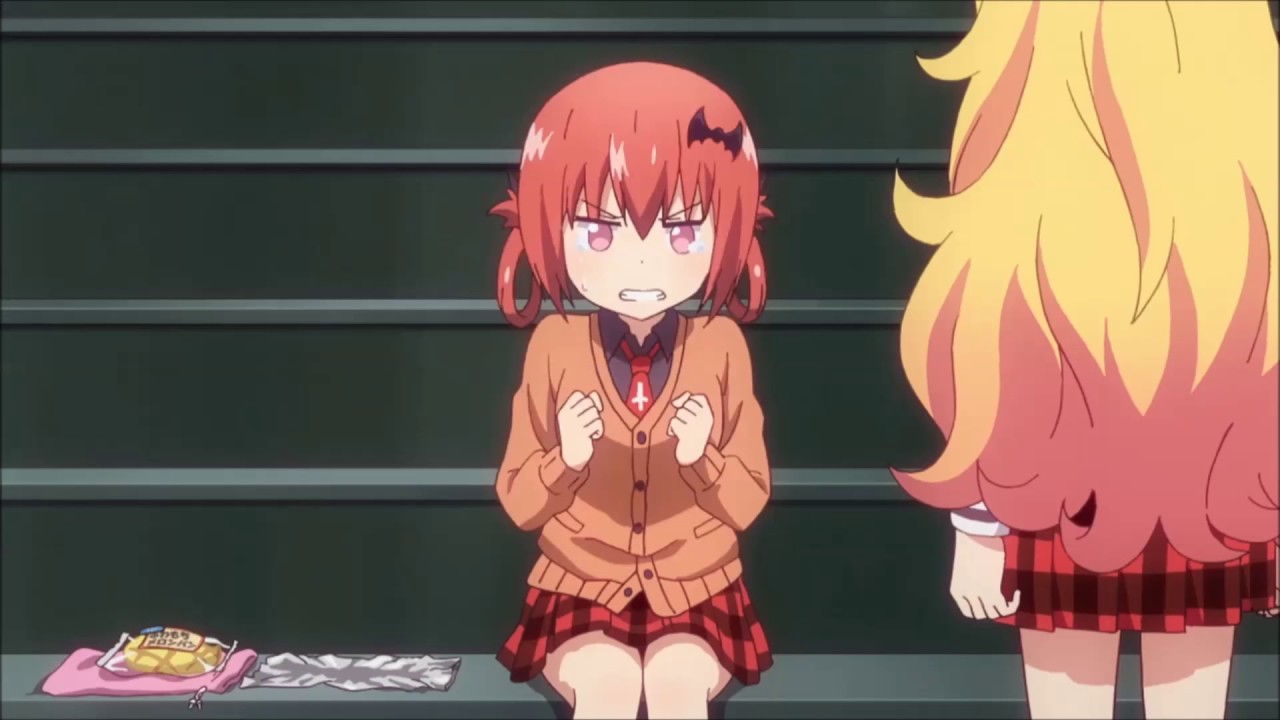 Kurumizawa Satanichia McDowell aka Satania is the dumb one. Her stupidity and shamelessness is something to witness. You will feel sorry for her.

Shiraha Raphiel Ainsworth aka Raphi is the troll. She has no objective other than to harass the living hell out of demon Satania. She is by far the most messed and cruel character in the show…. which in overall anime-dom is not much… Angels, and demons too apparently, are sent to earth high schools to learn more about humans. Being top of her class, Gabriel descends to do just that. Everything is going well, she is picking up trash, nice to people and all around… angelic, then she discovers MMO RPGs……

Since playing it, now she salty as all hell video game addict. She is messy, rude, and generally don’t care about much else. And we follow her daily life.

The show thinks that the whole Satania vs Dog over melon bread is funny, it was not funny the first time and it is not funny the 64th time. Stop trying to make this happen, it’s not gonna happen.

Episode 7 had musical numbers….. yeah. It was about counting sheep…. I mean Cerberus…. I mean Gabriels….. I thought it was cringe-y and wasted good chunk of time which could have been spent on something else.

It is rather frustrating how the show does not take advantage of its premise, it is about angels and demons going to a human high school. What I mean is that if you forget that the characters are supernatural biblical being, almost nothing will change. I had to remind myself that Gab was an angel from time.

Comedy is a hard thing to judge as it just depends on taste. But here is the thing…. I almost don’t remember any jokes from this series apart from the forced melon bread thing.

This is more about the English translation, but they seem to change some of the word choices. There are time where a character like Gabu or Raphi says something like “that’s good” in Japanese, but the translation is “Thank heavens”. Why is there a “angelic” tone to that bit? Raphi maybe, but Gabu does not seem like the person to care about these kind of things anymore, and it bothers me how the translator is shoving in things that are not there.

The characters are pretty likable, let me explain myself. Let’s start with Vignette, probably the most likable character. She is soooooooooo wholesome. She comes from very loving family has a pet that loves her, and is goody goody to the tee. And yeah, she is a demon. She is flawless when it comes to being wholesome, and I have no issue with it, until the plot decides she gets mad.

Then there is Satania, probably the series’ most popular character. She is dumb beyond salvation. And during the first half the show I kept telling myself “well, at least she’s rich.” Turns out her family is delusional as well in thinking they are nobles, and suddenly, I have a whole new level of pity for this girl. At first she is just a dumb rich girl, now she is a dumb girl from a dumb family.

As mentioned above, this is a guilty pleasure show for me. I enjoyed it, but I know for a fact there is nothing spectacular about this show. It passed the time and I was entertained. But that is about it. I will probably forget about this show in a while as nothing really stood out to me. I realize it wasn’t trying to be this grand tale, but I got very little out of it. Still, I am sucker for these kind of shows, so I don’t regret watching it.

Have you seen this show? If so, what are your thoughts on it?