Final Fantasy was originally released by Square Soft in 1987. This is the game that started it all, the original Final Fantasy. The original version of the game was made for the NES, then it was ported to, let me see here, PS1, PSP, iOS, PC, MSX, Wonder Swan, Gameboy Advance, Mobile Phones, and 3DS, so a lot of different platforms. I played the PS1 version on my PS Vita.

What is in a name? The game was titled Final Fantasy because it was the last chance for success before bankruptcy for Square Soft and potentially being fired for Sakaguchi Hironobu. It really was the final dream for a company, and I am glad the title is ironic at this point. This is the beginning to fantastic world of Final Fantasy.

Warriors of Light are the heroes brought together by prophecy to save the world from evil. There are 4 of them, choose the classes you like. They each carry a crystal to show they are chosen for their adventure. I chose Warrior, Thief, Black Mage, and White Mage, the default setup.

Garland is a fallen knight from Cornelia that joined the side of evil. He is introduced by kidnapping the princess to the Chaos Shrine. He is one of the few named characters, but does not get that much of screen time.

World is devoured by darkness and things don’t look good. But there is a prophecy talking about 4 warriors with carrying 4 crystals saving the world from evil. Then warriors have to go around the globe and defeat the 4 fiends and their boss to save the world from evil.

It was a real treat to see where it all came from, the turn based combat system, the inns, the exploring. Sure, they are clunky and can be frustrating at times, but it was there and they worked, I liked them.

One big difference FFI has from the later games in the lack of mana or SP, rather they have…. I guess you can call counters. So in the above image, you see 1/5? That means you can use either Fire 2 or Bolt 2 one more time, and 5 times total after recovery. They were a lot more conservative with the ammunition.

One of the most infuriating part of the game is in the beginning. The miss rate is incredibly high, for both parties. During the first hour of the game, of my 4 characters, maybe one or two (if lucky) will land a hit. So these battles will go on forever because neither parties can land any hits on each other. As the game progresses and the stats get better, more hits land, but I thought this was unreasonably high.

Some of the commands don’t make sense to me. To open up the map, it is hold down circle and press “select”. Maybe this made more sense on the NES version of the fame as the controller was way simpler, but I don’t think the PS1 version has any excuse. I think remakes or remasters are a chance to improve on mistakes or make something better, this clearly was not that.

The streets and alleys in town are very narrow, I assume it was because of the technical limits of the NES, I am not complaining about that. But the NPCs move around a lot in these towns, and many a times I was blocked out of Inns, story sections, and cornered in a alley by wandering NPC. I had to wait until the NPC decided that it felt like  moving again, to a direction I need it to go I am hoping. If they made the NPCs near choke points stationary, it would have made the towns so much easier to venture through, this was most apparent in one of the latter towns Lufenia.

This may be because I am a “casual,” but I wish it had more items in the game. I played the PS1 remastered version, which I believe is very faithful to the original NES version, correct me if I’m wrong, so the only base healing item in the game is Potion. There is no Ether, Phoenix Down, nor Hi-Potions. So what ended up being the key factor in playing through dungeon was whether or not my White Mage lives, when she goes down, I restarted the game as there is no hope, she’ only one that can effectively heal and revive the party without spamming 40 potions.

The simplicity of the game was refreshing. Like always having pizza or to hambergers to just having a piece of banana. The bare bones fell of the game was something I didn’t know I appreciated to this degree.

As it was on sale, I played the PS1 remake on the Vita, and the game looks beautiful. It is 2D Final Fantasy and the sprites look good and the towns are very nicely done. The transition from 8 bit to PS1 was very smooth. 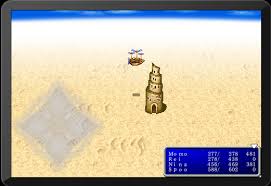 I was surprised how well the game still works today, be it I played the PS1 version. So many aspects of this game still lives on in more recent games, even outside of Final Fantasy. This game has side quests to upgrade your characters, finding material to get the most powerful items, there is a mothershucking airship in this game, and Bahamut made his debut here as well. This game has a lot, and it was great.

Being a remake, it comes with couple of extra stuff, one of them being the gallery where you can see the sketches and concept art used for FFI, as a designer, this was great. The black and white sketches to color paintings, this was a real treat.

The music of this game is quite great. I think my favorite is the Prelude and the theme for Chaos Temple. Also, this is where the FF main theme and the Victory Fare comes from, classic! Hard to believe these were made so great on the NES.

I liked the Final Fantasy series, so I decided to do it legit from the beginning. Like the franchise or not, you have to admit that it is one of the pillars of gaming history and groundbreaking pioneer to JRPG genre.

It is spectacular to see how a series went from 8-bit bare bones game to 3D open world with cutting edge graphics with complicated lore is great to see. While it is missing a lot of things, the structure is extremely sound: great turn based gameplay, theme of men fighting things beyond comprehension, exploring wide worlds, getting an airship, and saving the world.

I hope you liked this, I certainly did!