Final Fantasy II is sequel to successful Final Fantasy. It was released in 1988 in Japan on the NES/ Famicon by Square Soft and did not come to North America until 2003 on Playstation. I had the chance to play the PS1 remaster of the game, so I was not able to play the extra dungeon that came with the PSP remaster, for a game that no one talks about, this one got a lot of remasters.

Firion (center), Maria (right to Firion), and Gus (far right) are the protagonist of the story. They join the Rebellion to fight against the Empire.

Leon (left) is Maria’s brother who was separated from the rest of the cast in the beginning. He is later seen by the Emperor’s side for some reason.

Emperor of Palamecia is the main antagonist of the game. He wants to take over the world, later destroy it…. That is his entire story. 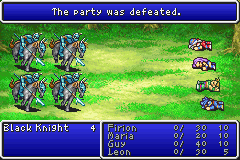 The story starts with our soon to be heroes attacked by the black knoghts of the evil empire. After losing, they are saved by Princess Hilda and joins the rebellion against the cruel Emperor. So pretty much Star Wars 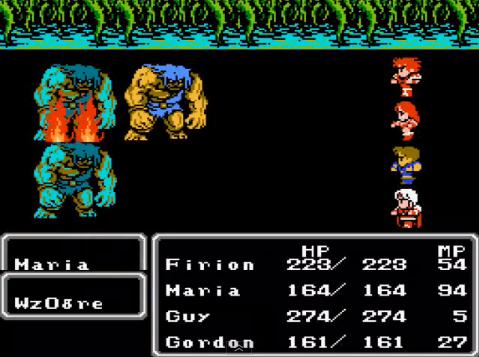 The combat is very similar to the original Final Fantasy, a turn based JRPG format. But unlike the original. it uses the more familiar MP pool system opposed to the counter system from the original.

The biggest change in terms of gameplay is the leveling system. How it works is to level up a certain aspect of a character, you have to practice that aspect. It seems like the precursor to the leveling similar to that of Skyrim, but in practice you find your character getting hurt purposely to raise HP and defense. 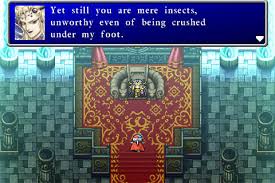 Right from the get go, FFII clearly shows that it is more story rich than the original game. Story starts with a cutscene, there are far more named characters, and much more was focused on telling a story than its bare bones predecessor. 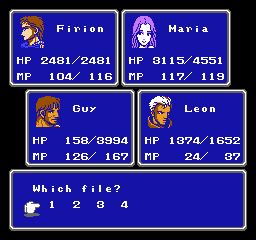 The graphics have improved. The UI is cleaner and the characters have portraits now! Even today it’s impressive to see how great the sprite work of the NES era looks. 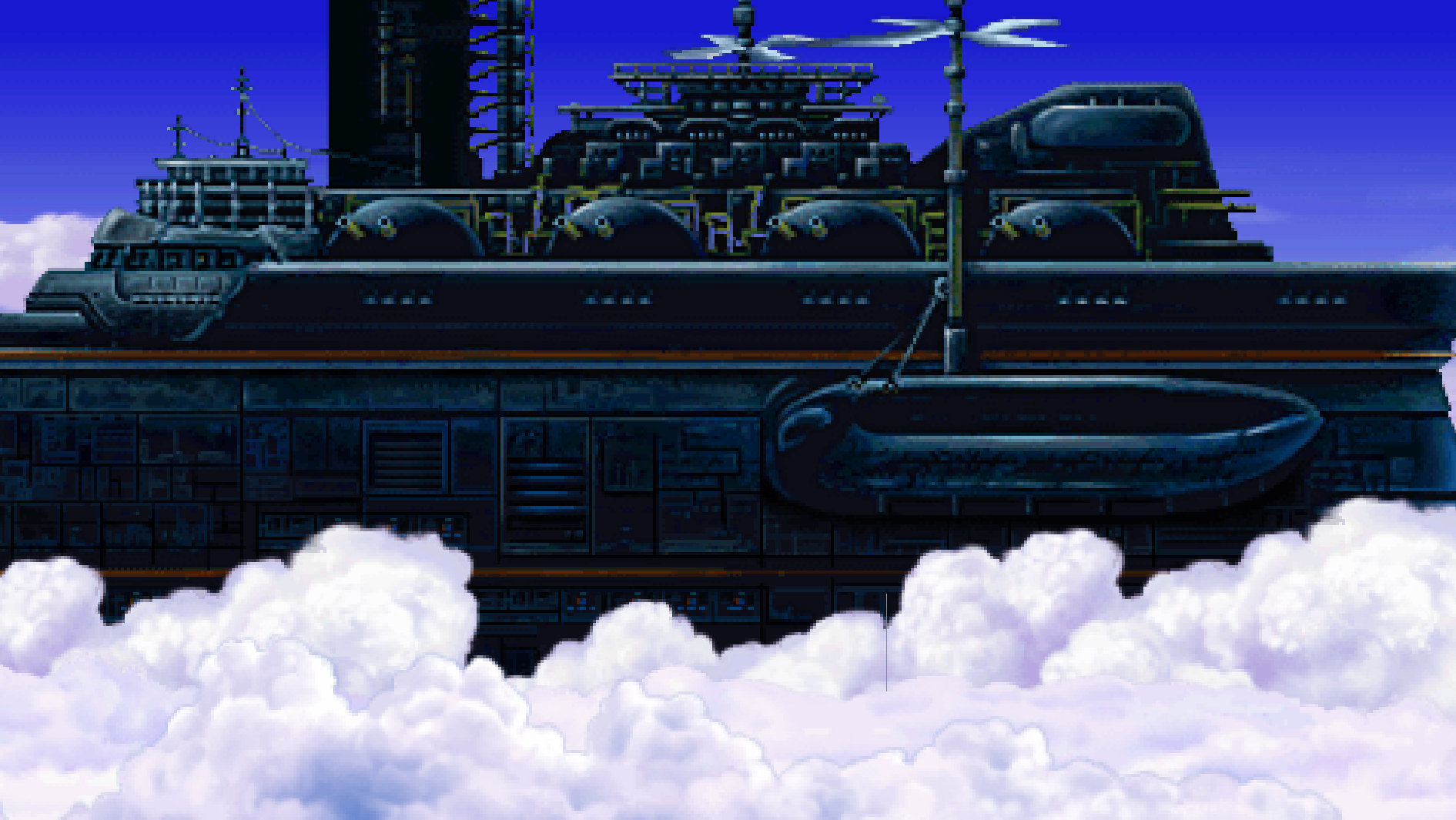 Especially on the PSOne remake I played, some of the graphics were really impressive. The images for large assets like the Dreadnought and couple of dungeons were great to look at. Several of the background art for combat were nice too, my favorite being hellish Leviathan.

The music of Final Fantasy series has always been great, but even among them, I think FFII’s songs can stand out. My favorite one is the main theme, I linked the orchestrated version here. It is so melancholic, almost matching that of Final Fantasy X.

If you’ve looked up this game, you probably seen it’s major complaint, the leveling system. In theory it makes sense, if you want your Firion to be a sword master, practice sword with him. But what a lot of people ending up doing is setting party members to hurt each other for HP and defence gain, wasting MP to get more MP, purposely scrweing themselves to get better. In practice, it did not work. I appreciate Square’s attempt in experimenting, but it did not pan out as planned.

One of the most unfortunate part of the above mechanic is that it limits change. If you want your main guy who’s been using a sword up to this point to change to lance, you better get his lance skills up or he will be weak. And this also applies to magic spells. 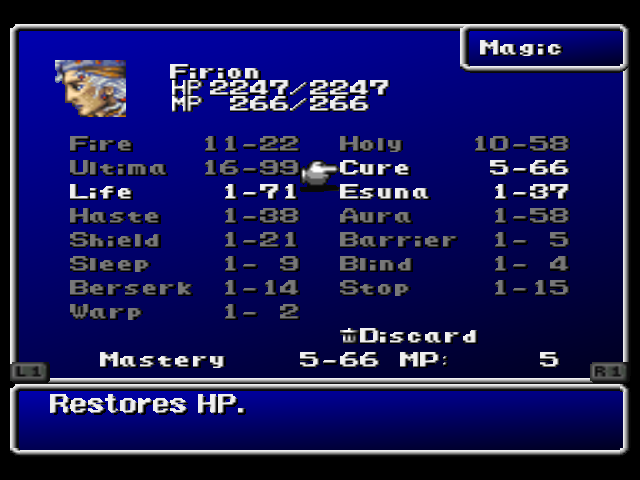 If you know of magics in Final Fantasy, you know that Holy and Flare are some of the most powerful spells in the game. While this is true in FFII as well, by the time I got this, my Fire spell was outputting more damage than Holy because Fire was at level 5 while Holy was at level 1. So for Holy to be useful, I have to grind until its level catches up, and I am wondering if I want to spend my time doing that. You see those numbers? The left indicate what level the spell is, and the right is exp points. When that reaches 100, then it levels up, meaning a lot of freaking grinding.

The game is really long. I usually like long games, hell my genre of preference is JRPGs. But this one test my patience, not by its overall length, which wasn’t terrible, but how dragged out so many parts felt. One of the important parts of the story is to get the Ultima spell, the most powerful magic in the game. To get the Ultima spell, this is what you have to do:

See what I mean…. parts of this could have been shortened to make the game better, in fact many of the missions in the game were nothing more than fetch quests.

Reading some of the reviews for this one, I thought I was going to hate it, but I thought the game was alright. While better than I expected, FFII did not really left its mark in gaming history like FFI did, I can see why but also makes me sad. Seeing absence of any FFII (and FFIV) characters in World of Final Fantasy was saddening, while not great, FFII is not something to be ashamed of.

The game tried something new immediately after the success of the original, and I think that takes guts. Even today, Square is experimenting with Final Fantasy series, some turns out to be more like FFXIII, and sometimes they become classics. I think experimenting is great and FFII was definitely a risk. 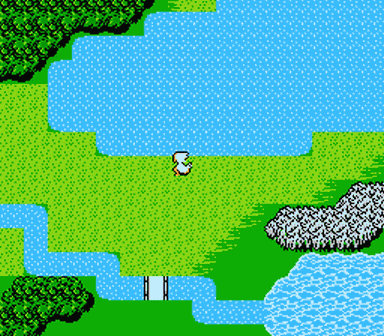 It was surprising to see how many things originated in FFII. Let me list couple, you will recognize most of this if you like the series: Chocobo, Malboro, man named Cid, the Ultima Spell, and Mythril.

Although it may sound like it, I had fun, just irritated a lot. I hope Square keeps experimenting and onto the next one!