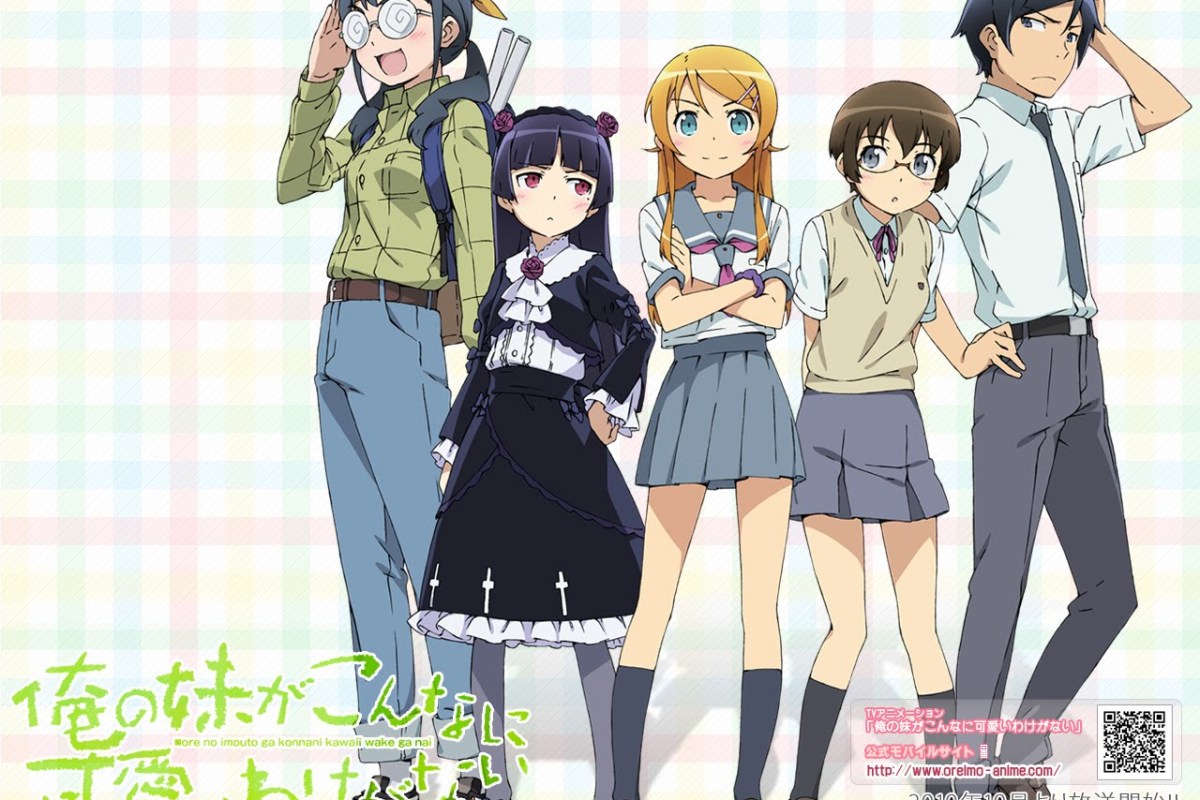 This is a first, review of both original light novel and anime adaptation, mostly because they are so similar I don’t want to do this twice.

Ore no Imouto ga Konna ni Kawaii ga Nai aka My Little Sister Can’t be this Cute is a light novel series by Fushimi Tsukasa and was adapted to an anime series by studio called AIC Build. The light novel series consists of 12 novels that ran from August 2008 to June of 2013. The anime last 2 seasons, consisting 25 episodes, it ran from 2010 to 2013.

As this series has been out for quite while and I am not going to recommend it, I am going to include major spoilers here, you have been warned.

Kousaka Kyosuke is the protagonist of the story. He is pretty average high school guy with a serious sister-complex. He pretty average in every spec, but really smart, but not dumb as well. He does try hard, but this only applies to things he really cares about, usually involving his sister.

Kousaka Kirino is the titular imouto, she is in middle school and has serious sister AND brother complex. She is completely addicted to incestuous Ero games and very obviously has a thing for her brother. Unlike her brother, Kirino is top of her class, pretty and is an active model, and very athletic, she is clearly parents’ favorite. 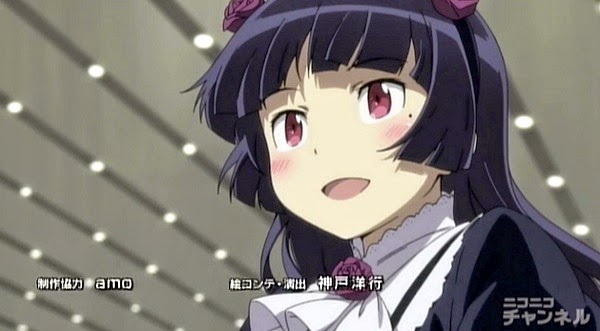 Kuroneko aka Gokou Ruri is Kirino’s “other” best friend. I say “other” because she is Kirino’s otaku side best friend. Ruri is little older than Kirino and eventually does become Kyosuke’s kouhai, underclassmen. She acts very haughty is is shy, she puts up a tough front but everyone who loves her knows she is just trying her best. While looking like this in public, she is a very maternal to her younger sisters.

Tamura Manami is the voice of reason. Manami is Kyousuke’s childhood friend who has not so hidden crush on him. She and Kirino had this awkward relationship that is built on decades of resentment for each other. While looking oblivious, she has the more clear vision on everything that is going on.

Aragaki Ayase is Kirino’s best friend and a classic yandere, for those of you who know know, yandere is a person who is all soft and kind on the outside, but is deeply cruel and messed up on the inside. Ayase is obsessed with Kirino and being her #1 best friend, and will go to weird lengths to keep her position and make sure Kirino stays on the virtuous path, that path is based on Ayase’s visions of course.

Kyosuke and Kirino are siblings but they aren’t always on best of terms. Kyosuke is your average high school guy, and Kirino is athletic, smart, pretty, and is working as a model, so super middle schooler.

Then one thing leads to another and the two starts to have a … romantic relationship.

The art in the novels are very good, the lineart is so freaking clean everything looks like they are ported from anime. That being said, the anime does really good job carrying the art style from the book onto the screen. While nothing is surprising, it was really well done. Almost nothing in terms of style was compromised during this transition. 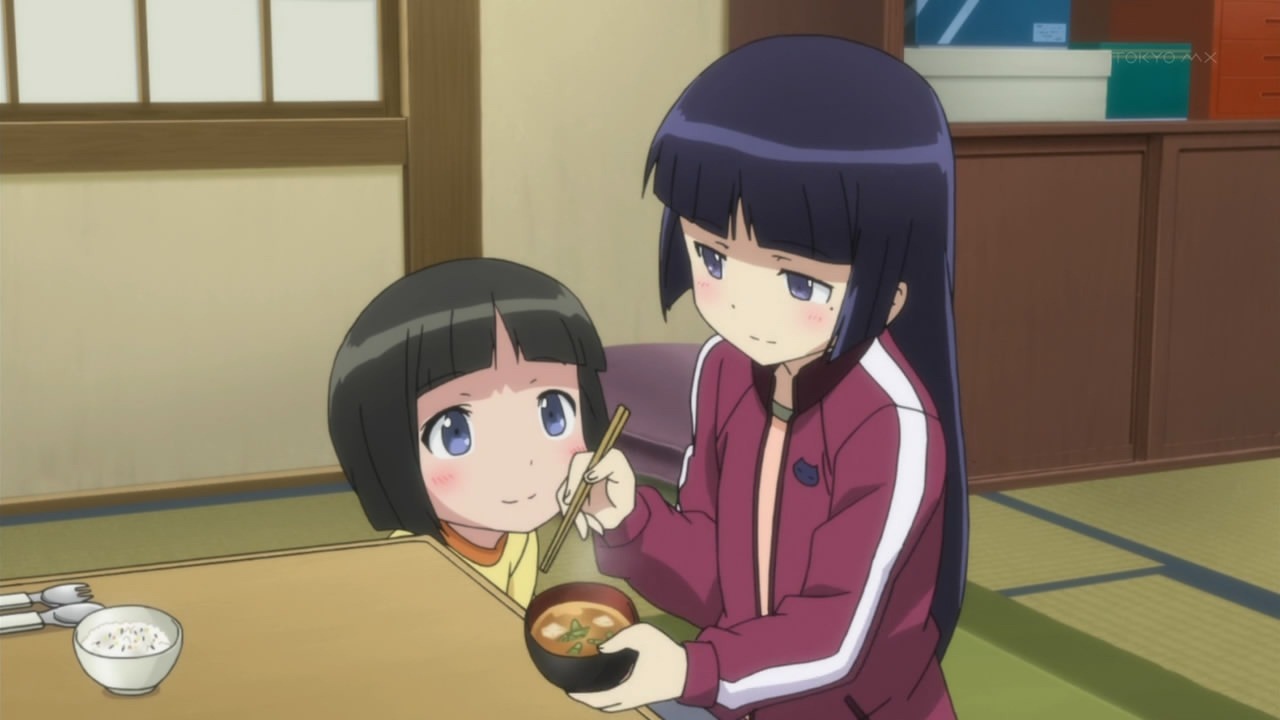 The most developed character in the story is Kuroneko. She is Kirino’s best friend as well as one time lover of Kyosuke. Because of the way she is she is very close to both siblings, a little too close.

And unlike Kirino, Kuroneko isn’t a complete bitch. She truly cares for her friends, worries about minor things, and excited over dates; she is great.

This is probably one of my favorite scenes. Manami, our voice of reason addresses the big fucking elephant in the room, incest. We all know how she feels about Kyousuke as it is so blatantly obvious, but she also says what everyone’s been thinking, incestuous relationship is not normal.

Also she beats the shit out of bitch Kirino.

Well, there is a lot to talk about, let’s about the leading characters. Throughout the whole series, Kirino is rather a bitch to her brother. And her brother constantly makes this stronger by bending to her every will.

I for one, am not okay with incest, both morally and biologically it is not okay. But good chunk of the cast are completely fine with this, a lot of them even support this decision. Kuruneko is probably the biggest supporter as she broke up with her boyfriend so he can pursue his sister…. wut. And for Kyosuke, he left Kuroneko, aka best girl, for his bitch of a sister. The last volume goes pretty all out for incest, with Kyosuke and Kiriko going on dates, Kyosuke turning down every member of his harem for his sister, and going to “wedding”. I won’t say it sickened me, but I will say I had hard time keep reading.

The anime cuts off character developments for some of the lesser characters like Kanako. In the anime, it seems rather forced and out of nowhere that she has feelings for Kyosuke. Being given the luxury of longer media, the light novel includes bits and pieces of Kanako everywhere: you see her texting Kyosuke, learning how to cook his favorite food, inviting him to her concerts and etc. Sure, she is no where near a main character as Kirino or Kuroneko, but she got more light than what the anime awkwardly gave her. The subtler aspects seem to be absent.

Looking back, apart from the incest stuff and parts that included Kuroneko, there is not too much that is memorable about the series. I remember there was a SMT reference in form of Megidolaon in the series but that is about it. I feel like if you strip that one aspect of the series, the incest, it quickly becomes really generic. Kyosuke leaving away from his family was the only aspect I remember well.

I probably should’ve seen the ending coming a mile away with a title like My Little Can’t be This Cute…. I guess the jokes one me…. I do like characters who have crush on their siblings, I think it’s cute and probably will grow out of it. But when it goes the distance… then it gets disturbing. Bro-com is cute because it is not going to happen, and when it happens… oh boy…

I feel like I am being really harsh on this show. Apart from the whole ending, it was alright… just alright. I would not go through series the second time.

Well here are my thoughts.