Also known as Restaurant to Another World is an anime adaptation of a light novel series of the same name by Inuzuka Junpei. The anime was made by Silver Link studio. The anime has 12 episodes and ran from Jul to September of 2017.

Aletta is demon girl that finds herself at Nekoya. She is employed my the Chef to be Kekoya’s waitress.

There is a magical restaurant called Nekoya, it is a modern day western restaurant in Japan. But on Saturdays, its doors connect to random places in a fantasy world.

The story looks at the lives of the patrons of Nekoya.

Visually, the show looks great. The backgrounds, although mostly limited to the restaurant has great lighting and mood about it, it is very homely. The character designs are good and the colors are vibrant!

For the first couple of episodes, the simplicity and the wholesomeness of the story was charming… but it repeats a lot. While it lasted, it was interesting.

Every patron of Nekoya has a story. While not super developed, it was alright. It reminded me of Mushishi. Just wish it went deeper than just surface level.

Episode 4 followed a lizard man and was god awful. There is now a narrator for some reason, and she narrates literally everything. I don’t usually mind narration, but in this case, the narration was literally describing what was happening on the screen. I can see!! The narration literally added nothing. To make it worse, when describing the food, the shots are so static I though the visuals froze. This whole section was a great example of Light Novel being translated terribly to the screen. I am sure they could have found a more interesting way to show what they did. 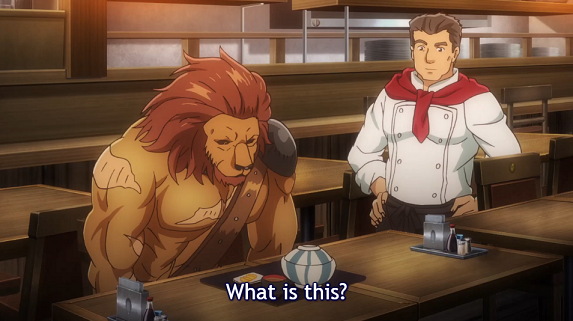 The show gets very repetitive. Almost every episode starts with an outsider character. They are in dire need of help and accidentally discovers the door, or is led to the door by another character, usually a grandfather or sorts. Here, they order a dish unfamiliar to them. They are skeptical at first but after the first taste, they become a fan of that dish and becomes a repeat customer.

This gets old after 3 or 4 times. But this is pretty much every episode. Of 12 episodes, only 2 or 3 are exceptions to the above formula.

What gets me sad is that the show has so much potential. The lore of the fantasy world is interesting, the show touch on what can only be described as creation myth, the significance of the dragons, the race politics surrounding the demon kind, and how Nekoya’s presence impact cultures. But the show explores only the very surface level stuff and never talks about these things again.

This show is not about cooking, there is absolutely no cooking in this show… okay, there was steaming of potatoes. Unlike Shokugeki no Soma, the show drives focus away from the cooking, and more on the customer experience, which as mentioned above, gets very repetitive.

This is the biggest weakness to this show, it does not go deeper. None of the characters in the show are developed beyond one sentence. I would be okay with this if the food and cooking were the focus, but it is not. The food in the show is very mundane to the viewers, and the process of cooking them (which could be interesting) is entirely omitted.

There were a lot of potential here, but the show did not seize any of them. If only Aletta was developed, it would be much stronger story…. but alas.