Battle Tendency is Part 2 of the Jojo series. The series is once again made by David Production and aired from 2012 to 2013. There are total of 16 episodes. Part 2 follows Jonathan’s gradson Joseph Joestar.

Joseph Joestar (left) aka Jojo is grandson of Jonathan from Phantom Blood. He is one of the last users of art of hamon. Unlike his grandfather who was prototypical gentleman, Joseph doesn’t hesitate to make himself look worse if it means he can win.

Caesar Zeppeli is grandson of William Zeppeli from Phantom Blood. He is a skilled Hamon user and dedicated his life to avenge his family against the Stone Mask.

Pillar Men are the main villains of Part 2.

The story continues the saga by following late Jonathan’s grandson, Joseph. Joseph already has some grasp on Hamon and is adept at combat. He fights vampires, but finds out there is a greater threat, the Pillar Men. Pillar Men are ancient men with super powers who created and can adsorb vampires. Speedwagon and his company discovered these Pillar Men and are trying to prevent their recovery to save the world.

At first, I didn’t know how to feel about Joseph. He looked like Jonathan, but he was a lot more chill and relaxed. He was not a copy of his grandfather, in fact, I think Jonathan will a lot to say to Joseph in terms of his behavior. His smartass attitude and playful approach to things has made me fall in love with this character!

At first, I thought Pillar Men wouldn’t be that interesting, I mean how can they top vampires. Then they got pretty weird. They are borderline immortals who can do weird shit with their bodies. And they are super fabulous. 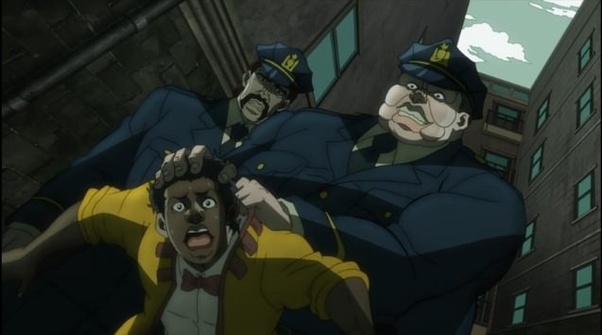 There is very little I didn’t enjoy about this Part. In the beginning of the part, we are introduced to this kid that Joseph rescues, Smokey, but he isn’t relevant for rest of the story. Then at the end he comes back to deliver a crucial info, where was he and what was he doing to be so crucial now?

I was surprised how much I enjoyed Part 2, part of this was because a lot of people seemed to skip the first 2 parts and head straight to Stardust Crusaders. I loved Joseph and his adventures to fight Pillar Men.